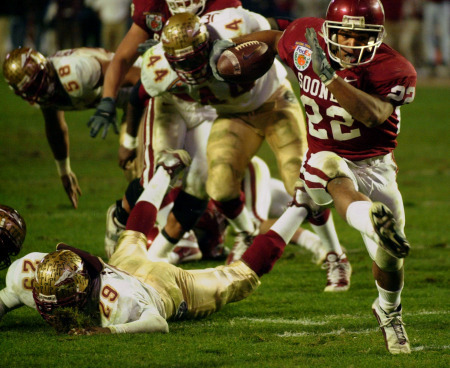 On January 3rd 2001 the Sooners and Seminoles met in the Orange Bowl for the third time and the stakes were higher than they've ever been. The winner of this game would walk off the field with a national championship. The Seminoles were 11-1 and champions of the ACC conference and while the Sooners were the champions of the Big 12 and undefeated they were still 10 point underdogs.

The reason why is because although both teams had arrived on college football's biggest stage they had come from polar opposite directions. Florida State was coming off of a decade of dominance in the 90's and had made Orange Bowl appearances and playing for BCS championships a thing of habit. They had beaten Nebraska in `93 and `94 and Notre Dame in `96. They were also playing in the BCS Championship for the fourth time in five years.

Oklahoma suffered through a decade of mediocrity in the 90's and hadn't been to the Orange Bowl since 1988. The once proud football program had fallen on hard times and was enjoying just its second winning season in six years with the first coming a year earlier in 1999. Bob Stoops had brought a new attitude to the storied program and although they were underdogs going into the game they wouldn't be denied the school's seventh national championship.

Following an interception by Oklahoma linebacker Torrance Marshall the Sooners took a 3-0 lead halfway through the first quarter. Florida State had a chance to tie the game in the second quarter but shanked a field goal wide right leaving the score 3-0 at the conclusion of a first half that featured a combined ten punts.

Late in the third quarter Oklahoma's Tim Duncan doubled the Sooners' lead by booting a 42-yard field goal and pushing the Sooners to a 6-0 edge. They would carry that lead into the fourth quarter and finally put the Seminoles to bed.

The key play of the game came in the fourth quarter when Oklahoma's All-American linebacker Rocky Calmus knocked the ball loose from Weinke as he scrambled. Safety Roy Williams pounced on the ball and the Sooners were ready to make it a two score game with a fresh set of downs at the FSU 15. Two plays later Quentin Griffin crossed the goal line for the game's only touchdown and fate of both teams was sealed. The Sooners would walk away having won their first national championship since 1985 and the Seminoles walked away completely shocked at what had just transpired. Two post game quotes complete sum up the feelings from each side.

"Growing up with the Sooners, people feared them. During my first year, some players said it didn't feel like you're a Sooner, not dominating college football. There was finger pointing and a lot of excuses and not much confidence and believing in each other. But, we're like Sooners now. The Sooners magic is back. We're dominating and have that great tradition coming back." - Rocky Calmus