Sooner Pedigree Among The Tulsa Players To Keep An Eye On

Share All sharing options for: Sooner Pedigree Among The Tulsa Players To Keep An Eye On 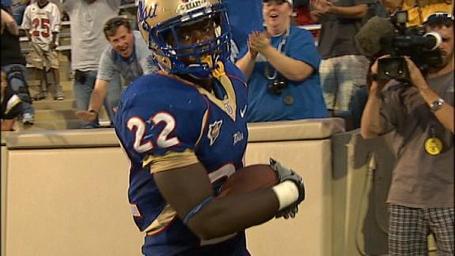 There are some interesting connections between the Tulsa and Oklahoma football programs such as Tulsa punter Cole Way, the younger brother of Sooner punter Tress Way, who will be trying to pin the Sooners deep on Saturday night. Another connection comes out of the Tulsa backfield where a familiar name will be carrying the ball for the Golden Hurricane.

Five Tulsa Players To Keep An Eye On

5. Linebacker DeAundre Brown - He sat out last season to focus on academics but was a member of the Conference USA All Freshman team in 2008 and led Tulsa in tackles in 2009.

4. Linebacker Shawn Jackson - His most notable moment last season was his 66-yard interception return for a touchdown at Notre Dame last season but that doesn't even scratch the surface of his impact on the defensive side of the ball. He's a specialists at getting into the opponent's backfield where he registered 15.5 tackles for loss last season and 8.5 sacks.

2. Running Back Trey Watts (Pictured Above) - Son of former Sooner quarterback J.C. Watts, Trey averaged 3.2 yards per carry in 2010 as a true freshman. After coming off a strong spring performance he's looking to make his impact known in 2011.

"He's really improved his speed," said head coach Bill Blankenship on running back Trey Watts. "He's night and day from when he got here as a true freshman."

1. Quarterback G.J. Kinne - Understanding the current Texas quarterback situation you have to think that Longhorn coaches are scratching their heads and wondering how they let this kid get away. Kinne was a true freshman in 2007 for the Longhorns before transferring out of the program to Tulsa. Last season he passed for 3,650 yards and 31 touchdowns to just 10 interceptions while also rushing for 557 yards and seven touchdowns.