Why does Lee Corso hate OU fans so much?

Share All sharing options for: Why does Lee Corso hate OU fans so much?

It was hard not to be distracted by all the gaping field of grass behind the ESPiN Gameday talking heads that would normally be filled with actual college football fans on any other Saturday.  More on that in a bit, but if you were as unfortunate as yours truly to have subjected yourself to Saturday's broadcast you were confronted with the same disturbing news I was and the ultimate kiss of death.  Lee Corse loves the Oklahoma Sooners this year.

I'll give you the same time I took to gather yourself as you come to grips with this news.

Corso's picking prowess has always been a complete joke, but once fans started to catch on to his destructive powers, to the point of booing when he actually picks their team, he reached another level.  Which is where he resides today and why his picks this weekend are all the more disturbing.  What you could probably guess about me is every Saturday, like all the other CFB junkies, I'm forced to watch Gameday.  Sadly there is no getting around ESPiN's massive coverage of the sport and despite my personal dislike for the network as a whole, nobody else can give you the amount of coverage they can.  Biased and self-serving coverage to be sure, but coverage none the less.  Back to the point and what you probably don't know about me is that while I subject myself to the Gameday broadcast, the t.v. always goes off before Corso can pick the OU game, or god forbid he's on site for a Sooners game, or don the OU headgear.  I just have a long standing superstitionbelief that if Corso picks you're team, you're screwed.  It's a bad thing.  A very, very bad thing.

So you can imagine my horror when it picked OU not one, not two, but three separate times during the Gameday analyst 2011 predictions segment on Saturday.  The first and possibly forgivable offense was Corso's pick of the Sooners to win the Big 12.  It was a unanimous decision amongst the panel, so he couldn't really do any harm with that one.  His second and sure to haunt the young man's dreams prediction was that of Landry Jones winning the Heisman this year.  Sadly, he wasn't done there.  Not satisfied ruining an individual player's season by picking them to win the Heisman, he served up another piece of ruthlessness pie and picked OU to win the national title (over LSU mind you, geaux cry now).  For some unknown reason, Corso has apparently made it his mission this season to ruin the lives of all Sooner fans. 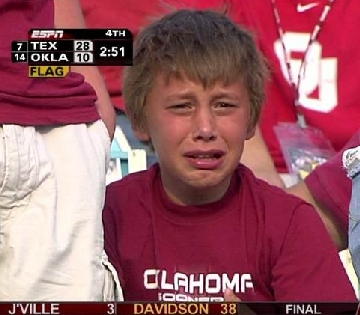 So back to ESPiN and their completely transparent decision to have Gameday broadcast from Austin, TX this weekend.  ESPiN made the unfortunate mistake of of taking their show on the road this week to Austin and much like the mighty Longhorn Network, was met with a record audience.  Why again exactly were they in Austin though?  Surely it had to be due to the fact that the team who resides in Austin is coming off a 5-7 season, replaced virtually their entire coaching staff after the failure of last year, and are completely and utterly irrelevant, except in their own minds, from a national perspective.  Makes perfect sense, right?

Wellif that's the standard, one has to wonder why they didn't just simply choose to broadcast from Bloomington, IN instead?  The Hoosiers meet all those same standards, but with one major exception.  ESPiN doesn't have a financial interest in the success of their program like they do with Texas and ESPiN had a cable network to shamelessly pimp.  No matter how stupid it made them look by being on the Texas campus to begin with or how stupid Texas fans made them look by their shocking lack of support in coming out to support Gameday's presence.  Now a serious brainteaser for you.  Which debuted to a smaller audience this week, Gameday or the Longhorn Network?  Have fun with that one.