Kansas State is set to launch their own TV network with live K-state sports including the first game to be shown is a Volleyball game against Creigton.  They will also have their football game against Eastern Kentucky on their TV network. 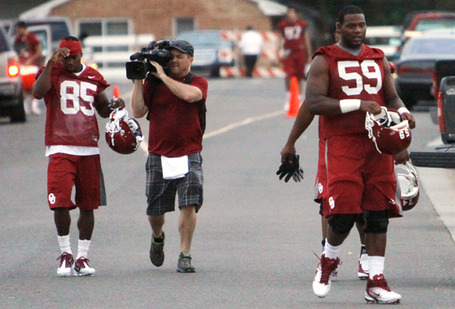 
Not to be out done by Kansas State, Missouri is also rolling out their TV network.  This one actually has a TV station behind it.  Student ran and university owned KOMU.  I'm not sure the broadcast range, but if it's like most campus radio stations, the range is about 50 yards.

What does this add up to?  The Big 12 Network is dead.  Promised last year by ESPN, Hinted at bieng in the works this spring, it looks dead.  When ESPN/FOX saved the Big12 last year, part of their carrot was all the money those 3rd tier rights would be worth to each school.  Texas, Oklahoma, A&M sure would be worth more, but each school was sitting on a revenue stream that they just had to tap properly either separately or collectively for the wealth to flow.

Over one year later we have the Longhorn Network, at $15millon a year for UT. (though as of NOW doesn't have one carrier).  We got LHN strong arming Texas Tech, and even threatening to not carry football games by Tech under the conference's Tier 1 and Tier 2 contracts if they don't sign over their football rights to the Longhorn Network, and the rest setting up streaming internet.