So the big assumption around the world (or at least in the areas that care about College Football) is that the University of Oklahoma and Oklahoma State University are a packaged deal.  There is no way to separate the 2.  Like buying a package of Twinkies…you can’t get just one…we are bound together forever, and ever, amen.

But is that REALLY true? 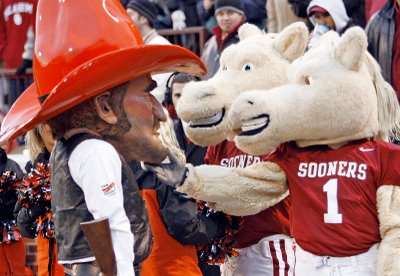 So that’s 5 years the 2 schools were in different conferences.

To help with the confusion of 2 Missouri Valley’s, the media started calling one group, the Big Six.  Colorado would join them in 1948, and eventually the Pokes, now Oklahoma State would join in 1958 as the final member of the Big Eight Conference.

That’s a full THIRTY YEARS that OU and OSU were not in the same conference.  Add in the previous 5 and OU and OSU have been in separate conferences for 35 years of the 94 years OU has been in a conference!

So is OU really a package deal with OSU?

Well, first off, is there a LEGAL requirement?  No…it is not in the Oklahoma State Constitution, which I’ve actually spent time looking at when I was arguing last year that OU and OSU HAD to stay together….Teaches me to parrot crap from WWLS radio.   I would assume there is no statue if it’s not in the Constitution.

What is in the Oklahoma Constitution is how the Oklahoma Higher Education Systems are set up.  Oklahoma State has its own system which has it a "Board of Regents".  This system includes: All the Oklahoma State Universities and branches, Conner’s State, NE A&M, Langston, and Panhandle State.

The University of Oklahoma is in a separate system that consists of OU and its branches OU-Health Sciences and OU-Tulsa, Cameron State, and Rogers State.  Each school has its own President, but with one "Board of Regents"

Both systems then report to and are governed by "The Oklahoma State Board of Regents for Higher Education" The Oklahoma State Regents for Higher Education is the statewide coordinating board of control for the state's colleges and universities, nine constituent agencies and two higher education programs.(for the record there is a third system, and that is of the directional schools)

The Board of Regents for Higher Education though is only for matter of education, not athletics.  They have little or no say as to what conference a University joins for Athletics.  The members of this board are also members of OSU’s Regents and OU’s Regents, for the most part (though not all)

In Oklahoma, the Board of Regents are appointed by the Governor of the State of Oklahoma, and they get to serve as long as they want.  Being a Regent in Oklahoma isn’t a full time job, and I don’t think they get paid.  Most are wealthy and successful businessmen that love their schools.

Wow…that was boring…but the point to understand is OU and OSU are in two separate systems.  What one does is not governed by the other.  They are completely separate!

But, the final member, and the final authorizing authority over both boards is the Governor.  It’s his/her responsibility that the schools are acting in the best interest of the people of the state, and that includes the other school’s system.  Since he/she appoints the BOR he can have them replaced.  The Governor has final veto.

The Educational systems do not go to or answer to the Oklahoma State Senate or State Congress.  The only control the legislature has is funding and budget approvals as submitted by the Governor from the Board of Regents.

So, the only LEGAL tie the 2 schools have is through the Governor.  That’s it…no more, no less.  The Governor would have to decide if one school left for an athletic conference and left the other behind if that was beneficial to the state and to the citizens…that’s it.  I would think it would be a hard decision for a Governor to veto something that was approved and deliberated over by a Board that he/she appointed to do that very job.

So, where is OU and OSU tied?  It’s more culturally and family ties than anything else.  OU’s President David Boren while Governor established OSU’s fine veterinary school, which is still named after him.  OSU’s President Burns Hargis got his law degree from OU.  Mrs. Molly Boren also went to school at OSU.