NCAA Baseball Tournament - Scouting The Field At The Fort Worth Regional

Share All sharing options for: NCAA Baseball Tournament - Scouting The Field At The Fort Worth Regional

The fourteenth ranked Sooners will play their 59th game of the season Friday afternoon when they take on Dallas Baptist in the Fort Worth Regional of the NCAA Baseball Tournament. The Sooners drew the #2 seed in the regional and are making their fourth consecutive appearance in the NCAA Tournament. Oklahoma ended the season with a conference high 413 runs and a team batting average above .300. However, there's no question in anyone's mind that the team needs to refocus if they hope to escape this regional. Dallas Baptist can't be overlooked because they've already caused the Sooners to stumble once this year, TCU was a World Series team last year and the top seed in the regional and ORU has a chip on their shoulder. Here's a closer look at the teams Oklahoma is up against at the Ft. Worth Regional. 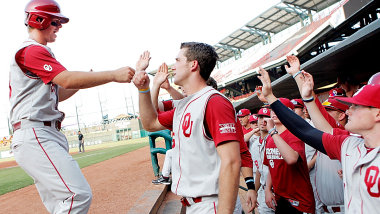 1. TCU - The Frogs return 19 lettermen from last year's squad that made it to the College World Series. Led by ace pitcher Andrew Mitchell and slugger Jason Coats TCU drew the overall top seed in the regional and will be the host team. Sunny Galloway is 11-2 against the Horned Frogs including a two game sweep this year in which games were played both in Norman and Fort Worth.

3. Dallas Baptist - The Patriots last made an NCAA appearance in 2008. They are lead by Jason Krizan who has an insane .431 batting average with 10 home runs and 76 RBIs. From the mound Brandon Williams is their ace. He has compiled a 9-3 record this season with a 4.13 ERA.

DBU snapped a six game losing streak to the Sooners on April 19th this year when they beat the Sooners 3-2 in Norman. They have a history of playing Oklahoma tough with 17 of the 24 games played in this series being decided by one run or less.

4. Oral Roberts - ORU was one of the teams Oklahoma faced on their way to last year's College World Series. The Sooners downed the Golden Eagles 7-6 in the Norman Regional.

Oral Roberts returns seventeen letter winners from that squad and are hoping to make a longer stay in this year's tournament. Ace Alex Gonzales will take on top seeded TCU in Friday night's game. He has an 8-5 record on the season and a 2.61 ERA. From behind the plate the Golden Eagles are led by Chris Elder who is batting .330 with 10 home runs and 51 RBIs.

Although Oklahoma and ORU have split their last last ten meetings the Sooners are 3-0 since 2000 when playing them in the NCAA Tournament.