CWS Projected Field Of 64: Looking Ahead At Oklahoma's Chances Of A Repeat Performance

Share All sharing options for: CWS Projected Field Of 64: Looking Ahead At Oklahoma's Chances Of A Repeat Performance 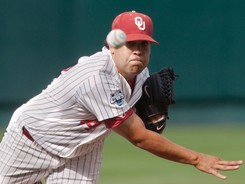 With the regular season of College Baseball coming to a close, many teams are still wondering where they will fall in the field of 64 or if they will find themselves with an invite period. The NCAA has handed out it's first official invite to Princeton and there are still many invites to be signed, sealed, and delivered. One burning question is: will Arizona St. win it's appeal and be qualified to play in regional or are they out giving their seed up to likely an ACC school? There is still quite a bit of baseball to be played and we have yet to see the conference playoffs. This does not mean that the field will be shaken up. I think there will be little to no effect at all while some teams may slide down or move up a single spot in the seeding. Anyway, here is a quick look at the most recent field of 64 regional projections with Oklahoma landing in the Houston Regional along with Rice, Arizona and Princeton rounding out the group.

If these are the final pairings, I like Oklahoma's chances on moving out of the Regional and advancing into Super Regional play.

Rice is a team that is not superior at any one thing but does enough to win. They do not have a pitcher with an ERA under 2.04 while their relief pitchers have really struggled in the final stretch of the season. I'm sure that the new bats have affected the way every team has hit the ball, but that is no excuse. All teams have to play with them and all teams have the same disadvantage. Don't expect Rice to be an easy team to beat as they have consistently been ranked finding themselves anywhere from #14 to #27 depending on what poll you are using and recruit some of the better players in the nation.

Arizona is a team much like the Sooners...a team that plays phenomenally behind their ace pitcher in the series opener then follows it up with inconsistent pitching and ups and downs at the plate in the second and third games. They have also not lived up to the expectations building an 11-10 conference record. While they have struggled for the past couple of months, they have gotten back on track lately completing their first series sweep at the end of April against USC. They are still finagling with the batting order as well as the pitching rotation to get the best results heading into final two series of their season.

Princeton is a team that qualified by winning the Ivy League Championship. I do not expect them to do much in the tournament but they could surprise some people. They started the season playing LSU in Baton Rouge and ended up taking a game from the then ranked #7 Tigers. However, they were thumped by LSU in two of the three games and the only other ranked opponent they played (North Carolina) beat them by nine runs. Expect Princeton to struggle against better pitching while giving up runs to big time bats.

Oklahoma has a very good chance against each of these teams. It is all going to come down to the rotation and I would expect Arizona to throw their best against us while we did the same. Even if OU does lose to Arizona, I still think the Wildcats are very inconsistent and let the Sooners sneak past them after completing round-robin play. Yet, the Super Regional will be a different monster with Oregon State in the projected mix.