Share All sharing options for: Tyler Ogle: An Unsung Hero 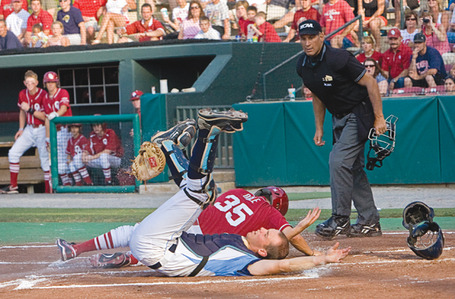 For those who follow baseball on any level know that the catcher spot is looked at through the lens of being a defensive position and anything on the offensive side is bonus. Most of the time, catchers are catching 90+ MPH fastballs at least 100 times a day, often leaving the catching hand numb. Throw in the wear and tear on the knees from popping in and out of a squat with the numerous times the ball hits somewhere where there is no protective gear and anyone can see why it is looked at as a defensive position only. This is where Tyler Ogle breaks the mold.

Last season, Tyler Ogle quickly became on of the main components on offense during the College World Series. Throughout the entire season, Ogle had a .311 batting average while adding 11 home runs. Fast forward into the CWS and Ogle picks up his average to .442 tagging him as OU's best hitter. Then, the Sooners get a match-up against the South Carolina Gamecocks in an elimination game. Ogle steps up in extra innings and hits a solo shot to give OU the 2-1 lead only for the field to relinquish it in the bottom half of the inning eventually losing 3-2. The Gamecocks went on to win the CWS. Just imagine what could have happened and the impact Ogle would have had if OU wins that game!

This season alone, Ogle has been able to with stand the wear and tear of catching again while hitting .326 with four homers to boot. He stepped into the lead-off batter spot during the Texas Tech series and up until yesterday was 6-for-15 while scoring six runs. It seems that no matter what the challenge it, Ogle is able to step in and live up to and even surpass expectations

Ogle is and will continue to be an integral (correction on bad use of the English language on my part) part of the team both behind the plate and while at bat. Look for Tyler Ogle to be one of the reasons OU's Big XII championship hopes continue to breathe.