Where Does Corey Nelson Fit On This Sooner Defense?

Share All sharing options for: Where Does Corey Nelson Fit On This Sooner Defense? 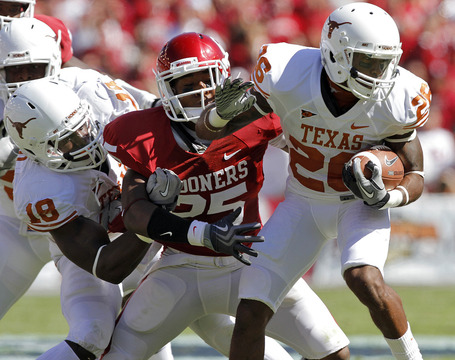 One of the most feared defensive units Oklahoma has put on the field in recent years was the 2000 National Championship defensive unit headlined by players such as the safety duo of JT Thatcher and Roy Williams, CB/WR Andre Woolfolk, and a pair of LBs in Rocky Calmus and Teddy Lehman while the fast yet powerful D-Line was anchored by Dan Cody. Just this short list is enough to send teams running home to their mommas. There has not been a defense as atrocious as this one in recent years however, the 2011-12 defensive unit has the potential to rival the 2000 National Champions. (I could write an entire story simply talking about the similarities of the 2000 National Champs and the 2011 roster). If the 2011-12 defense wants to become a thing of legend, there are some questions to be answered. A major concern (aside from the defensive secondary) is: How is Brent Venables going to get Corey Nelson, labeled the best defensive player on the team by Bob Stoops himself and even going as far as to saying that at times it wasn't even close, on the field? I have always taken the stance that you need to have your best available players on the field at all times in order to maximize your chance of winning. So how is this going to work?

I don't want to throw any of my options out there right off the bat, but figured I would ask Sooner Nation how they think he should be used. With that said, what is your solution to getting Corey Nelson on the field?

I will go ahead and give you all my "no way in a million years does this happen" solution to getting Corey Nelson on the field. Oklahoma could always switch to a 3-4 defense from their base 4-3 defense. Now OU will have the option of playing two inside linebackers, which I would like to think Nelson would hands down be the #1 option for at this point (of course Tony Jefferson would be a good option as well if he isn't moved to a safety). The four linebackers on the field also means that Oklahoma could possibly start its fastest four which would include the likes of Corey Nelson, Tony Jefferson, and of course Travis Lewis. These three on the field at the same time is a formidable force in my opinion and could help OU find its way back into being one of the best rushing defenses in the nation. Also, the four linebacker option would give OU the capability of playing the most talented players without having to sacrifice a ton of experience. Like I said, while this is an option, there is no chance that Brent Venables will change the scheme of his defense in an attempt to get a single player on the field.

Oklahoma is going to have to take every little opportunity they have in order to get Corey Nelson on the field with significant playing time. The more chances Nelson has to be on the field the smoother the transition is going to be between Travis Lewis and Nelson. Plus Nelson will develop into the game changer he has been labeled as.