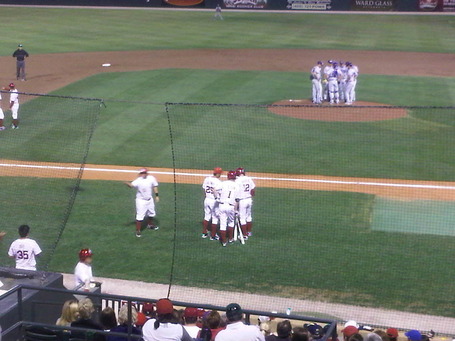 (Sorry about the quality of the pic..I took it using a cell phone because I am too cheap to buy something nice)

In case you missed it, Oklahoma was looking to get back to its winning ways against a Top 10 opponent in TCU on Tuesday night after dropping two of three against K-State in Manhattan, KS. If there was ever a time for the Sooners to turn the corner and look every bit the part of a CWS team, this game was it and Oklahoma came out swinging, literally.

Jordan John got the start against the Horn Frogs and threw for three innings tallying a total of 6 K's before being removed from the game. Oklahoma has a plethora of pitchers and would cycle through a total of 7 in the 9 innings in an effort to keep the bullpen stocked for the upcoming Bedlam Series.

Scoring runs had seemed to be hard to come by for the Sooners and Sunny Galloway took note deciding to change the lineup. Casey Johnson who seemed to have the hot hand recently was moved into the leadoff spot in an attempt to get the bats going often and early. Needless to say, Johnson was successful with the tactic employed by Sunny and the rest of the team took to it as well. Tyler Ogle drilled a homer to left and several other Sooners added 2 hit games. As most of us know, Sunny likes to bunt and there was no shortage of it on Tuesday night to help score a few runs and advance base runners. However, offense was not the only story of this game.

Oklahoma had no errors in the field and had a monster play to tag the runner out at home (Ellison rocketing a throw from center to home to retire the side). TCU on the other hand racked up error after error and seemed unable to do anything right. Overall, Oklahoma played a solid 7 innings and began to slip a little with the final six outs. Part of this can be attributed to the rotation of pitchers completing 1/3 of an inning before being pulled. However, at this point the game was well at hand and TCU did too little too late.

The Sooners are now 25-8 and will face OK-State in the Bedlam series beginning Friday at ONEOK Field in Tulsa. Let's hope the bats continue to swing and the defense continues to give the Crimson and Cream a memorable and enjoyable weekend.