Share All sharing options for: The Lon Kruger Dossier

Although we've been informed about three or four times this week that OU had their man, it looks like this time it's the real deal. Lon Kruger actually popped up on the radar before, but the reports were that he had rebuffed our offers. This time, it looks like Joe Castiglione managed to strike a deal, as Andy Katz of ESPN reports:

Oklahoma will name UNLV's Lon Kruger as its men's basketball coach, a source with direct knowledge of the situation told ESPN.com. Kruger and athletic director Joe Castiglione were negotiating through Friday with a deal to be announced. Oklahoma is waiting to make it official so as to respect UNLV and allow the Runnin' Rebels' players to be told of Kruger's departure.

So who exactly is Lon Kruger? He's a 58 year old basketball coach who born in Silver Lake, Kansas in the northeast part of the state. He has strong ties to Kansas State, as he played and coached there. As a player, he led the Wildcats to back-to-back Big 8 titles in 1972 and 1973, and was the conference player of the year in 1973 and 1974. Since then, he's had about 35 years of coaching experience - 6 as an assistant and 29 as a head coach.

Read the rest of the story for many more details! 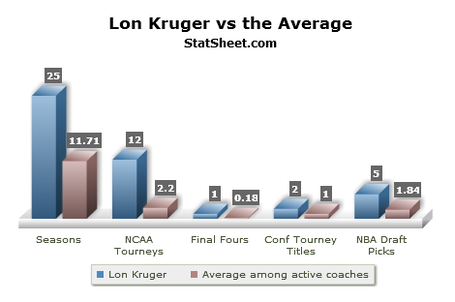 About the only thing Kruger doesn't have on his resume is a national title. As you can see from the chart on the right, Kruger is an above average coach in many respects.

He has compiled a 479-304 career record, for a 0.612 winning percentage. At all five of his previous gigs, Kruger improved the record of his inherited squad within 2 to 4 years. This includes taking a woeful Florida Gators squad that only had 7 wins and turning them into a Final Four team four years later.

Kruger is 14-12 in NCAA Tournament games. That actually works out to a better winning percentage than the likes of Rick Barnes and Buzz Williams, and is on par with Matt Painter. He's been to a Final Four, an Elite Eight, and a Sweet 16. Of the 13 teams that Lon Kruger has coached into the tournament, 8 of them have advanced at least one game. After he left Texas Pan-American for the Kansas State job in 1986, his teams have made a postseason tournament 17 of 21 possible occasions. Considering that making the NIT or NCAA Tournament generally means that you are a part of the national conversation, Kruger's teams are relevant on the national stage at about an 81% clip, which is pretty remarkable.

What His Peers Think

Lon Kruger helps to set the bar for integrity in our profession. His history of success in college basketball is even more impressive when you realize he has repeatedly revitalized programs all while operating strictly within the rules. Lon is a coach’s coach. We all have something to learn from him.

Without a doubt, Lon is one of the best tacticians in the game. I love Lon. He does everything above board. He has a program fans can be proud of.

Larry Brown, member of the Basketball Hall of Fame, and in the 1000 win club as a head coach:

Very few coaches have been able to change cultures as quickly and successfully as Lon Kruger. He understands how to mold a group of individuals into one team with a common goal and has proven that time and time again. Lon has high standards for all those around him and he possesses a passion for winning, but not at any cost. That is arguably his strongest trait.

Year in and year out, Lon Kruger is as good a coach as there is in the country. His teams are always well-prepared and never take a night off.

A Few Blips Of Info On His Coaching Style

It's hard to find a lot of information on the X's and O's of Kruger, but here's a few small blips of info that I pulled together from various websites, news stories, and message boards:

He Vastly Improved The Attendance At UNLV

Here is a quote of that from the UNLV website:

A major part of succeeding at home is the environment in the arena and this is important to Kruger and his staff as they continue building the program. UNLV averaged 14,228 fans per home game last season and sold out the famed Thomas & Mack Center in February 2009 vs. BYU (18,523 fans) for the program's first home sellout since 1993.The BYU game in 2010 sold out again, then UNLV drew over 18,000 fans in its next home game against New Mexico, which marked consecutive home crowds of 18,000-plus for the first time since 1991.

The success of the program has also expanded off the court under Kruger's direction, who starting with the 2008-09 season took an active role in overseeing the program's marketing and community outreach efforts. UNLV's 2009-10 attendance numbers at the Thomas & Mack Center were the largest since Jerry Tarkanian's final season (1991-92) and the Runnin' Rebels climbed to No. 18 overall in attendance and No. 1 on the West Coast.

Other Points and Notes

The Oklahoma men's basketball program was in shambles. We knew it, the school administration knew it, Jeff Capel knew it, and everyone who follows college basketball knew it. This is why we had a long, drawn-out, and difficult coaching search. I can picture guys around the country talking to each other saying, "the OU job is a project". Could anyone possibly argue with that?

Usually when you have a project of a job to offer, you are forced to settle on a candidate from a lower division of the sport, or from a smaller program. Luckily, what OU has going for it is a rather large recruiting budget, excellent facilities, and one of the better athletic departments in the nation. I think it was those saving graces that enabled us to sign a coach of the caliber of Lon Kruger.

What did our program need? When we're looking for a coach, we really needed a guy who has a proven track record with "project teams" - a guy who can roll up his sleeves, tackle a huge problem, and has a history of success in those situations. We also needed someone who can clean up the program, a guy who can run a tight ship, but also with a laid-back attitude to avoid turning off recruits. Finally, we needed an experienced coach. We needed someone who could show up on the recruiting trail and say, "I'm bringing more than just shiny buildings and equipment. I've won before, I've won a lot, and I can win against some of the best in the sport".

Lon Kruger measures up to all those needs.

Every single program that Kruger has inherited has been a "project team". Every. Single. One. And each time he has turned the tide. Bill Self gets a lot of credit for Illinois' resurgence in the early 2000s, but it was really Kruger that laid the groundwork in the late 90s and turned the Illini into a winner. At UNLV, he got personally involved in the marketing and groundwork to help put people in the seats, and guess what? UNLV started recording some of the best attendance figures in nearly two decades!

He's known for taking care of unsavory business behind closed doors. He doesn't want to embarrass his players out in public, but he'll make sure they follow the rules. He doesn't have a history of scandals or NCAA violations. And yet, Kruger wins. He wins a lot. To be depressed about getting a guy who has 479 career wins and a 0.612 career winning percentage is like being depressed about getting your favorite dessert when you thought you were getting broccoli. And Kruger wins consistently by squeezing the most out of the players he gets, rather than setting his eyes on the biggest fish in the recruiting ocean. If you have any nasty thoughts about this hire, go read what some of the winningest basketball coaches in history have to say about Kruger (quoted above)!

Again, as I said in several comment threads, I challenge anyone to find me a coach who was even semi-available that has the distinguished resume that Kruger does.

My prevailing opinion is that this is a great hire for Oklahoma. They're getting a great coach and a great man. I see no reason why this move will fall flat on its face. Do you honestly think that a guy with this history of success will crumble with a huge recruiting budget? Could it get any worse than the last two years? The answers to both of those questions is unlikely. If you are pining for the glory of 2009-2011 OU basketball, I am completely at a loss for words.

The one thing that concerns me a bit is the reported $2.2 million per year salary figure. If that is true, it would make Lon Kruger among the highest paid college basketball coaches in the country and pull him even with Mike Krzyzewski and Rick Barnes, and just behind Rick Pitino. This is likely to inflate expectations among OU fans. I simply ask that you give the guy more than one year. If the upcoming season doesn't improve much on last season record-wise, please consider how deep in trouble our basketball program was.

Kruger is not going to be able to walk in, wave a magic wand, and make everything better. It would be nice, but it will probably take at least three years to engineer a turnaround to something that we could call "success". In that case, bear in mind that we are paying this guy premium money to get OU back to a level of respectability and success that it once enjoyed as quickly as possible, NOT instantaneously.

Of course, people will say that this is the "safe hire", but I think that this is equally risky as a young-up-and-comer. Why? Because of the salary figure. People will, unfortunately, hold Kruger to an unfairly high standard so he needs to start producing results pretty fast or else Lon and Joe Castiglione might start getting a little heat. While a younger coach at a mid-major might be more of an unknown (hence the risk factor), he would be considerably cheaper.

That being said, I think that OU is paying top dollar for one of the most underrated coaches in college basketball. Let's face it. There's only so far that you can take UNLV, and Lon took them most of the way there. While Kruger hasn't necessarily won it all, he's what you would call a "consistent winner". His teams are always in the mix. After all the trouble with the NCAA after Sampson and Capel, and after the last couple years, doesn't "consistent winner" sound great?

I think that most of the criticism of Kruger lies in the fact that he's an unknown, and that people always fear what they don't know. Why was Pastner a popular name? Because he's the coach of Memphis, and everyone associates Memphis with a great basketball program. But what has Pastner done? Basically nothing. Lon Kruger's announcement won't have the pizazz that a Brad Stevens or Shaka Smart hire would have, but what Kruger lacks in pizazz, he makes up for in substance.

Just give him a chance to prove it, rather than condemning the hire before the guy even walks into the press room.