This is what you've driven me to Joe C.

Share All sharing options for: This is what you've driven me to Joe C.

An open letter to Joe Castiglione:

Today was my breaking point Joe C.  After yet another rumored candidate for our current basketball head coaching vacancy proclaimed his disinterest I have reached the point of no return.  I'm about to ask of you something I never, ever, could have imagined I would do.  It's important to say this upfront Joe, it's not you it's me.  I don't blame you for what I'm about to ask of you, I blame myself.  I know I shouldn't care as much as I do, but sometimes I just can't help myself.

I know this won't be easy for you to hear, believe me it's even harder for me to say.  Just know that it's coming from a good place and that no matter what, Sooner Nation and I will always care about you.  So as hard as this is going to be for me to say, I know who should hire to be our next men's head basketball coach.  Now before you click the jump to read any further, I want you to prepare yourself because this one is going to sting a little bit. 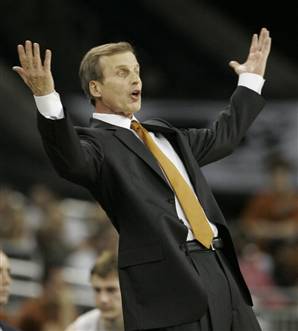 Joe C, it's time to make The Godfather offer to Rick Barnes.  I know, I know it's unthinkable.  Just the idea of even considering a coach of any sport at the University of Texas elicits a vomit inducing feeling.  I can assure you that no matter how long after this has been posted, whenever you are reading this I will very likely still be in shower futilely attempting to wash off the sliminess of my previous statement.  Could we actually get him?  Doubtful. Would Sooner Nation even accept him?  Even more doubtful.  That said, desperate times call for desperate measures sir.

In this fan's opinion, the biggest challenge our next head coach will be facing is the lack of current and incoming talent.  Well as much as it pains me to admit, there is arguably no better recruiting head coach in the game than Barnes.  You want a guy who knows the state of Texas, check.  Heck, you'd even get the added bonus of opening up a pipeline to the recruiting hotbed known as Canada!

Yeah sure he always finds a way to choke in the tournament, but the key part of that statement is the "in the tournament" part.  Hiring him now only increases the chances that when he eventually does put it all together for the first time ever, it's while he is patrolling he sidelines of LNC.  I mean at some point the odds will have to fall in his favor at least once, after all even Bill Self fumbled his way into a national championship one time.

Other pluses, he's used to dealing with an apathetic fan base and half empty arena.  He could continue to never be bothered in public since nobody every recognizes a non-football coach.  He's used to playing second fiddle to a football monster and the low expectations that accompany it.  He'll be a perfect fit here!

Finally, just imaging the gut punch it would deliver to the Longhorns would make it worth however many millions it would take.  Sure, they would probably try and tell you how they didn't really care.  How they could get Phil Jackson to replace him if they really wanted to, but how his 11 NBA championships didn't qualify him for the opening because he's not from Texas.  All kidding aside, getting a recruiter coach the caliber of Barnes while simultaneously sabotaging our most hated rival is the recipe for a perfect marriage.

So there it is Joe, this OU fan's theory for saving our basketball program.  It won't be a popular idea and I could be risking my OU fan card for even suggesting it, but sadly that's how far I think we've fallen.  It's been 54 years and it's time to repay the Darrell Royal favor.  Hell, they were dumb enough to name their football stadium after the guy the least we can do is reciprocate.  I can see it now, the Rick Barnes Basketball Arena.  My desperation with respect to our current coaching search has driven me to this and none of us will ever be the same again.