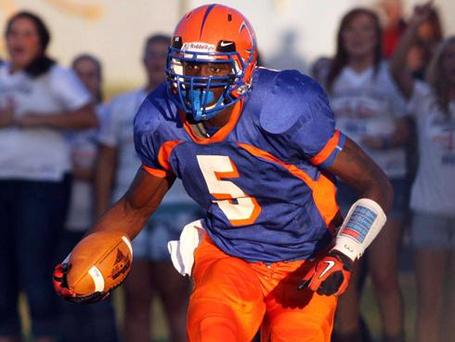 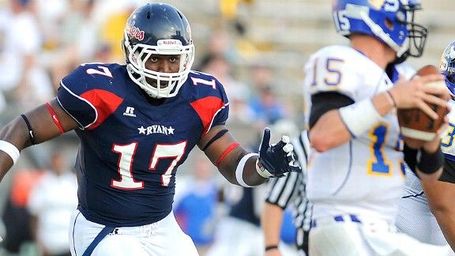 The OU football banquet weekend of December 16th is shaping up to be an epic recruiting weekend with multiple high profile 2012 recruits expected to be in attendance. It's long been a weekend the OU coaches have preferred to use for it's relaxed and family like atmosphere surrounding the football awards banquet. It's a good sell for potential recruits and their families and the Sooners are taking full advantage with it this year.

Check out all the names that have been confirmed so far after the jump.

The five star wide receiver and #1 overall recruit in the 2012 class (per Rivals) confirmed a couple weeks ago that he would be in Norman for the OU football banquet. Needless to say, getting DGB and his family on campus for yet another visit is certainly a good thing. He recently confirmed a Top 5 of OU, Texas, Mizzou, Arkansas, and Alabama and said he was in no hurry to make his decision. His father also stated that DGB would not be announcing at the upcoming Army All-American game as had been speculated previously. It could last up until signing day, but I wouldn't necessarily expect that. DGB has repeatedly said he'll make his decision when and where he feels comfortable and there will be no better weekend for our Sooners to show him and his family that kind of atmosphere than Dec. 16th.

That's right people, the 2012 #1 and #2 overall recruits will both be in Norman next weekend! OU alumnus Bill Jones was able to confirm through Edwards' father that he too will be in town for the OU football banquet. Many believed that Edwards had recommitted to Florida State not long ago after the Noles made a strong push to tame his wandering eyes. However, with his reported visit this coming weekend to Austin for the Texas football banquet and now this OU visit. Well, it would seem somebody might not quite be as solid in their recommitment as previously believed. It's not OU's style to put on the full court press, in terms of pressuring recruits, but given the recent decommitment of Polo Manukainiu, Frank Alexander's graduation, and the assumed departure of Ronnell Lewis, I'd expect the OU coaches to be selling legitimate early playing time for the Denton Ryan standout. Edwards and his family had previously expressed a great deal of respect and admiration for the Sooners just a couple of months ago, so you would have to think that still the remains and coupled with the very realistic prospect of early playing time would be a very strong selling point for OU.

Yet another California target for the Sooners, who has also confirmed he'll be in Norman the weekend of the 16th. McNamara is the #2 TE for the 2012 class and even though the Sooners already has verbals from two TEs, would be a welcome addition to the class for his play making ability over the middle of the field.

We told you earlier in the week about DE Kyle Kelley's upcoming visit.

Also, Bruce Kittle was out in Washington earlier this week visiting elite OT Zach Banner who came away with plenty of good things to say about OU and the first year o-line coach.

In addition to 2012 targets, there will also be several 2012 commits in attendance who no doubt will be helping to influence some of the recruits up above. Those already committed who are expected to attend include: RB Alex Ross, OG John Michael McGee, WR Sterling Shepard, C Ty Darlington, QB Trevor Knight, OT Kyle Marrs, and recent TE commit Brannon Green.

Plus we're still a week out, so more names could certainly pop up next week. Even if that doesn't happen though, as you can already tell it's shaping up to be one heck of a recruiting weekend for the Sooners!