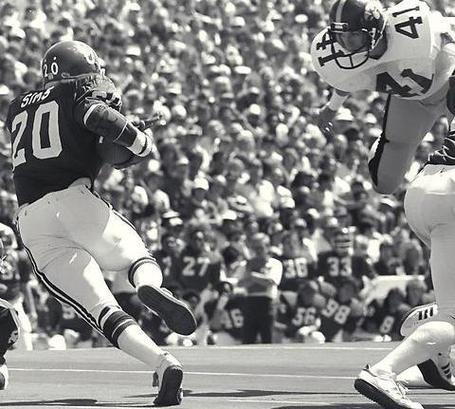 The last (and only) time Oklahoma and Iowa met on the football field Bob Stoops was a freshman defensive back (#41) for the Hawkeyes.

Oklahoma opened up their 1979 football season by hosting the Iowa Hawkeyes at Memorial Stadium in Norman. It was the first and only time the Sooners had played Iowa and now thirty-two years later a couple of familiar faces will be reunited as the two teams face off once again on the gridiron.

When the Hawkeyes came to Norman on September 15, 1979 Bob Stoops was a young defensive back in the Iowa secondary. He played there from 1978-1982 and then was a graduate assistant until 1987. In 1981 Kirk Ferentz arrived in Iowa City as an offensive line coach and the two coaches became acquainted. Ferentz wasn't on the sideline that day in Norman but Bob Stoops was on the field. As his Sooners are in Arizona getting ready to play the Hawkeyes for just the second time Stoops is hoping for a result much like the game he played in.

Iowa held a 6-0 lead at the end of the first quarter but Oklahoma was methodically chipping away at the Hawkeye defense and ended up taking a 7-6 lead into the half and then pulled away with two fourth quarter touchdowns to win 21-6.

The offensive attack was much different then than it is now. The Sooners ran a total of 79 plays that afternoon and 61 on them were rushing attempts. That's on pace with the number of offensive plays (actually just a few behind) Oklahoma runs today but the run/pass ratio is completely at the other end of the spectrum. OU was decent at the pass back then. (J.C. Watts completed 61% of his passes for 183 yards) but they were exceptional at the run.

Led by Billy Sims the Sooners averaged 4.4 yards per carry and tallied 269 total rushing yards that day. It was the type of rushing performance that keeps a defense both on its heels and exhausted from the constant pounding. Perhaps Stoops will remember that when it comes to playing Iowa the second time around on Friday night.