Limiting The Weeden To Blackmon Connection Part I: Pressure

Share All sharing options for: Limiting The Weeden To Blackmon Connection Part I: Pressure

This could have been the biggest Bedlam game in the history of the rivalry. It could have been a game so big that the word "epic" wouldn't have done it justice. However, Texas Tech, Iowa State and Baylor came along and down graded it to just being a game that will decide the conference championship and most likely a trip to the Fiesta Bowl. That really isn't a bad consolation prize when you stop and think about it. It would be a first for the Cowboys and would further a tradition of conference dominance for the Sooners. However, a few weeks ago both teams had a much bigger prize in mind.

The Cowboys were primed not only to make their first ever BCS game but were in perfect position to be in the championship until an off night in Ames, Iowa cost them their title shot. Part of the struggle that night was the three interceptions thrown by OSU quarterback Brandon Weeden. Before that game, Weeden had been the first part in the most prolific passing attack ever seen in Stillwater and a key figure in Oklahoma State's rise to BCS championship competition. That game has come and gone and while OSU may have fallen to Iowa State it doesn't remove the fact that Oklahoma still has to figure out a way to deal with the Cowboy quarterback.

You're not going to stop Weeden from connecting to Blackmon. Its been going on for two seasons now and not a single opponent has been able to do so. What Oklahoma can do it limit what they're able to do by keeping the connections short and in front of them. In order to do this Oklahoma's defense has to pressure Weeden all night long. 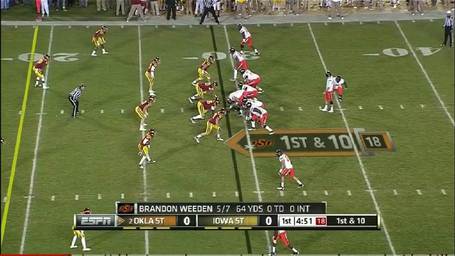 Here's the formation Weeden threw his first interception from in the Iowa State game. The back goes into motion leaving Weeden suspect to the blitz which ultimately leads to a bad pass which is picked off. I'm not Brent Venables but anytime I see this formation I would call a blitz. Again, its not going to stop the Cowboy offense but it does disrupt the timing and keeps the passes shorter because there isn't enough time for the long ball to develop. 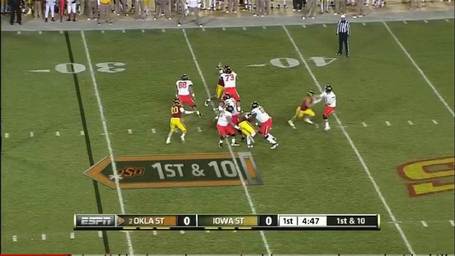 You really can't fault Weeden for this. The blitz got to him before he could plant and make a decent throw. Where Weeden is different from the last two quarterbacks Oklahoma faced is that he's a pocket passer and won't tuck the ball and run for 40 yards like RGIII and Jared Barnett will. In the face of pressure he's most likely going to take a sack of force the throw 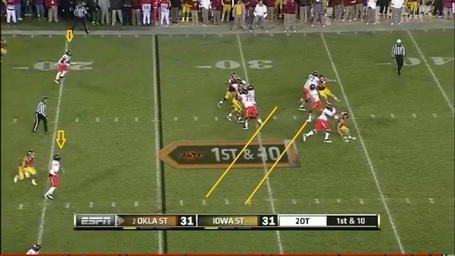 Here's an example of what I'm talking about. This is Weeden's third pick against Iowa State. The pocket is starting to collapse but there are a few options there for him. He has a wide open running lane to the left but we've already said that he isn't RGIII and isn't going to take that route. He also has two underneath receivers in which he can hit on short routes or scramble and let them cut up field if their defender commits to stopping the run. All of these options would require an important first step which is simply to step up into the pocket. Weeden instead forces the deep pass to Blackmon which results in the overtime interception and the Cowboys' first loss of the season.

Now please don't interpret this post as me saying that Weeden isn't a good quarterback. He's more than earned his merit as one of the top passers in the Big XII. What I am saying is that like most quarterbacks he gets frazzled under pressure and doesn't always make the best decisions. Like I already mentioned, Oklahoma isn't going to shutdown the OSU passing attack but they can possibly slow it down. Weeden had 16 passes that he didn't connect on against Iowa State and most of them had two common factors. The first was pressure and the second was that they were intended for #81. We'll get to that in part II.