Share All sharing options for: Reliving The Pain - How The Final Play Went So Wrong For The OU Defense

Its not fun but going back and looking at film can sometimes be therapeutic to a heart-broken and frustrated fan. Obviously it doesn't change the outcome of the game but it can change the opinion of a hardened fan like me. I blasted Sam Proctor on the podcast Thursday night for playing the receiver wrong. Turns out I was the one who was wrong! Procter played it decent, not great but decent. He just gave up the outside corner which usually doesn't kill you because its a very difficult throw. You'd have to have a tremendously athletic quarterback who is able to throw the ball back across the field after scrambling to his left and put the ball on a rope while doing so in order to make that play work. Guess what... 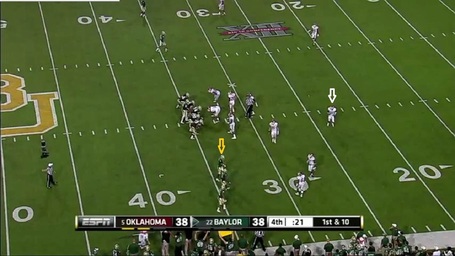 The play is an empty backfield/five receiver set for Baylor. The Oklahoma defense is spread with three defensive linemen to contain Griffin, two linebackers to cover the short middle and five defensive backs to cover down field. The touchdown comes from Terrance Williams who is lined up inside on the trips set at the bottom of the screen. Demontre Hurst, Tony Jefferson and Sam Proctor have the assignment of covering the trips set. Hurst will take underneath, Jefferson the middle and Procter the deep. 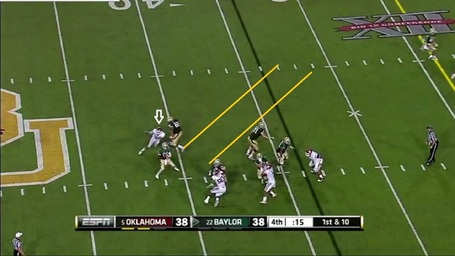 The play almost never happened as Frank Alexander gets a great jump and has a b-line to Griffin. However, you see that huge lane there to Griffin's left? That's the escape route that allows him to use his feet and set this play up. We have to give credit where its due here. 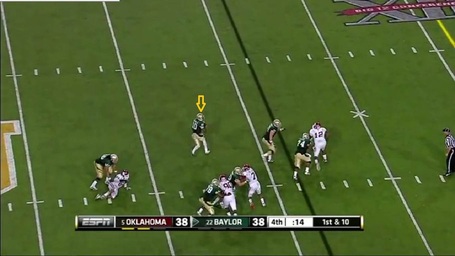 Griffin plays this perfectly by stepping up into the pocket and making plenty of time for himself to get set up to throw the ball by rolling to his left. There are no topside receivers open which is where he was initially looking so now Griffin has to look back to his right and make an incredibly difficult throw. So now the question is, why was Williams open? 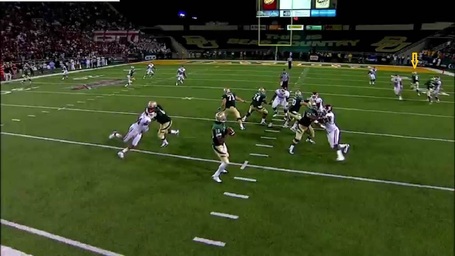 Here's Griffin's initial look and as previously stated there's nothing available to the left and the only option is Williams on the right side but he needs some time to let it develop. Williams will first take Proctor inside and then escape release to the outside which puts Proctor out of position. 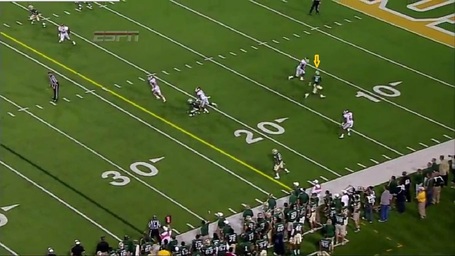 Here's another angle of the receivers. Williams has to create space to get to the corner and he's about to do it. You just have to chalk this up to good football smarts. 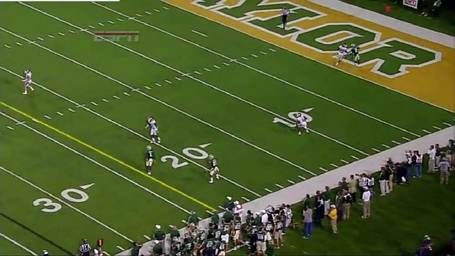 Note where Williams is now as opposed to where he is when he makes the catch. 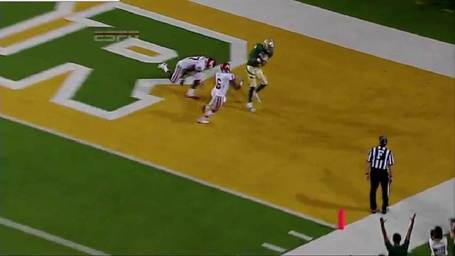 After reviewing it again its more of a great play by Baylor than it is a bad play by Oklahoma. Griffin bought the extra time and Williams played Proctor out of position and make the clutch catch. Could the Sooners have defended it better? Sure they could have but upon further review it appears that the only thing that went wrong on this play was that Baylor played it perfectly.