Get Bob Stoops on the horn, I've fixed the OU run game!

Share All sharing options for: Get Bob Stoops on the horn, I've fixed the OU run game!

Normally I wouldn't give away such valuable information for free, but because of my undying love for the University of Oklahoma I'm willing to make an exception this time.  Sometimes it's about more than just money.  Sometimes you just have to do things for the greater good and it's along those lines that I share this valuable information.

Prepare to have your minds blown after the jump.

It's the return of the triangle, er diamond, er Ponies, or whatever.  Actually, I'm thinking of calling it the Temple of Doom (temples kind of have a triangle look right?). Too corny?  Maybe, but I like it.  And without further adieu, I give you the Temple of Doom! 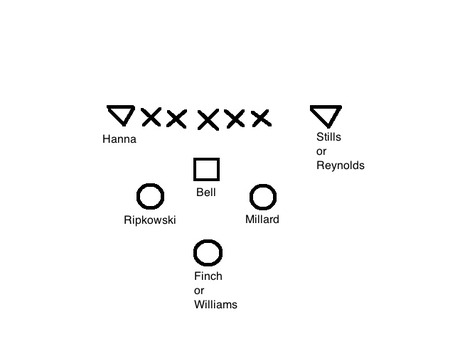 Take a minute to admire just how simplistically beautiful it is.  Can you even imagine how unstoppable this would be?  Just think about it.  If the Belldozer is as unstoppable as it appears to be, why not expand on it with something like this?  You have Blake Bell who is basically a fullback playing quarterback and has shown to be a force of nature running the ball.  For the same reason that the Belldozer is so effective, both his size and the fact that he is a QB so the defense has to hesitate because of the pass threat, you present those same options here as well.

Then you have the two Mack trucks on either side of him in Aaron Ripkowski and Trey Millard. If you haven't recognized just how impressive Ripkowski has been since his insertion into the Belldozer package then you're missing an amazingly physical throwback type football player.  Ripkowski has been a revelation in the Belldozer package as a lead blocker and would surely be just as effective in this formation as well. Millard would be a triple threat here serving as a possible lead blocker, a run threat, or a receiving threat out of the backfield.  On top of both Bell and Millard, then you have either explosive option in Roy Finch or Brandon Williams running behind Ripkowski and/or Millard with the added dimension of Bell drawing at least one defender because of his running ability.

But the beauty of this is that it isn't just a package you run out of.  With James Hanna in at TE, you have a threat that can get down field or down the seam.  With the significant threat the run threat would present, the opposing defense would probably have to bring in an extra LB or two thus creating a mismatch for Hanna in coverage.  Add to that Kenny Stills or Jaz Reynolds on the outside very likely facing one-on-one coverage and that is another match up this offense could exploit.  The threat that Hanna and Stills/Reynolds in the game alone would prevent the defense from just selling out to stop the run.  All three guys would demand the defense to respect the pass keeping that extra defender or two out of the box thus obviously opening things up for the run game.

There are so many options, so many different things you could do out of this, how would this formation be stopped? It's obviously not your full time offense, but it's something you can use repeatedly throughout the game because it's so multiple.  It's not just an obvious run package like the Belldozer has been thus far even taking into consideration its effectiveness.  Run this for a couple plays, then bring Landry back in and go back to your "normal" offense.  The defense would have no idea what hit them.

Am I crazy or is this actually as amazingly perfect as it seems?