What Makes The "Belldozer" Unstoppable?

Share All sharing options for: What Makes The "Belldozer" Unstoppable? 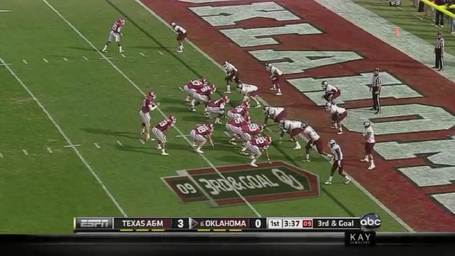 The schemes aren't overly complicated. In fact, they're actually quite simple but very effective and nearly impossible to stop. It all boils down to numbers and direction. Take the above play for example, this was Oklahoma's first touchdown of the game. To the right side of the center you have the guard and tackle along with the tight end. You also have two fullbacks in the backfield and the left guard is going to pull as well. It basically becomes a body on body blocking situation where the left side of the line seals off their side of the defense while the right side paves the road. 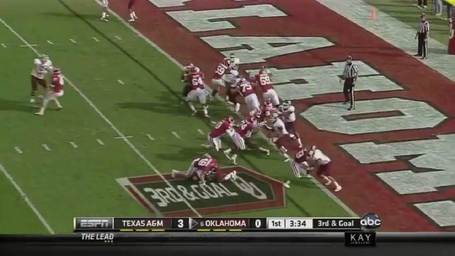 Here's the play in action. The left side is completely sealed off, the blockers on the right side are taking up all of the defenders (including a pancake at the bottom) and Bell is riding the hip of left guard Adam Shead. At this point the only way a defender is going to stop this play is to shed a block, bust through Shead in order to get to Bell. It just isn't happening! 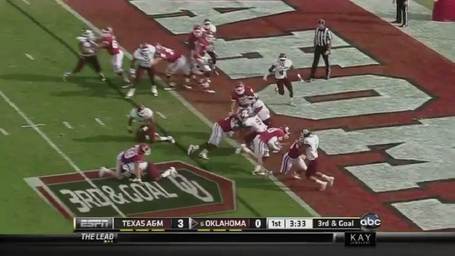 As Bell is crossing the goal line there isn't a single Aggie defender in position to make the play. Yes, that's Shead just above Bell blocking out two Aggies at the same time. In this scheme there are more blockers near the play than there are defenders making it a numbers advantage for OU. The problem for opposing defenses is that you really can't change the defensive alignment because there are two tight ends and a receiver up top. To change your defensive alignment would mean possibly leaving one of them uncovered. 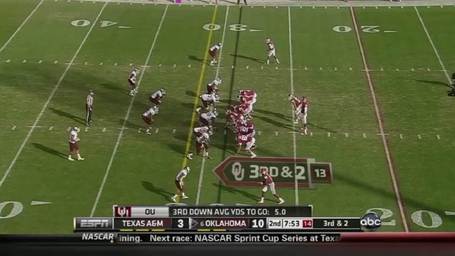 The second formation Oklahoma has used with Bell at quarterback is a bit more complex but not by much. The first thing we're going to see happen is the fullback change to Bell's left. Then the top receiver will come in motion giving Oklahoma three options that the defense must respect. Bell can hand the ball off to the receiver in motion, he can throw it or he can keep it. In this instance he keeps it and gets the first down. 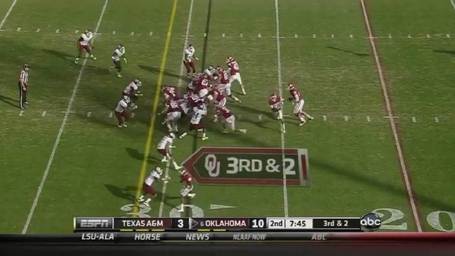 At the point of the "fake" handoff to the receiver the right side of the defense is committed to stopping the jet sweep (including the right outside linebacker) and the fullback is already through the line to take on the middle linebacker leaving Bell a lane to run through. 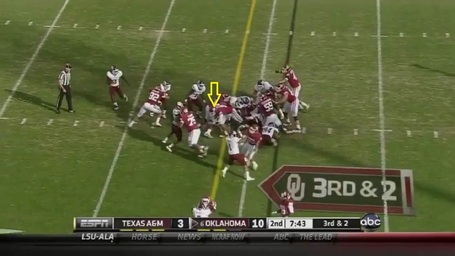 Somewhere along the way the Sooners are going to face a defense that will be able to stop the "Belldozer" but its not going to be because they crack the scheme but rather because they have a defender who can shed the block of drive an offensive lineman back into the play. Its not likely to happen with regularity though which makes this the safest formation and the most effective in short yardage.