Receivers Give Stoops The Edge In This Year's Red River Rivalry

Share All sharing options for: Receivers Give Stoops The Edge In This Year's Red River Rivalry

There's a lot to be said when it comes to Mack Brown and Bob Stoops in respect to their coaching careers. Both have won multiple Big 12 championships and each have a national title to their name. When it comes to the head-to-head Stoops owns a 7-5 record against Brown but more important to this weekend's game is that, under Stoops, Oklahoma is 7-1 against Texas when ranked higher than the Longhorns. Based on several factors the coaching advantage in this game can fluctuate year to year but Saturday's game hinges on a set of skill players that Texas has to account for at all times.

Ryan Broyles became the Big 12's all-time leading receiver last Saturday night and now is only 13 receptions shy of setting a new NCAA mark. To this point of the season he's averaging nearly 10 receptions for 119 yards per game with a total of six touchdown catches. The arrival of Kenny Stills last season gave the Sooners another "go-to guy" type option on the edge and the attention given to Broyles allowed Stills to have a freshman All-American campaign.

Broyles is still the top dog on this Sooner team but Stills isn't far behind. In the two games he's played this season he's averaging 5 receptions and  102.5 yards per game. While he's not yet Ryan Broyles he is good enough to draw extra attention and leaves Oklahoma's third option in one-on-one coverage. Advantage Oklahoma! Let me show you how. 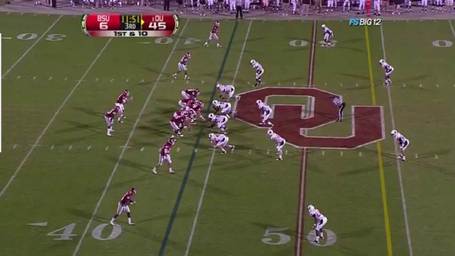 Oklahoma is lined up in a four receiver set to spread the field with Kenny Stills at the top, Ryan Broyles in the slot, tight end Trent Ratterree in the other slot and Jaz Reynolds at the bottom. Notice how Ball State has to line up to defend this. Running a 4-3 set - they move a linebacker over Broyles, a corner over stills and the receivers are bracketed by a safety. With a running back in the backfield they have a middle linebacker playing the run and another linebacker inside of Ratterree to take away the slant. The assumption here is that if Ratterree runs an out route then the corner picks him up and the bottom safety rotates to Reynolds. If Ratterree runs anything deep then the safety runs with him and the corner with Reynolds. This allows the receivers to adjust their routes based on what they see from the safety. 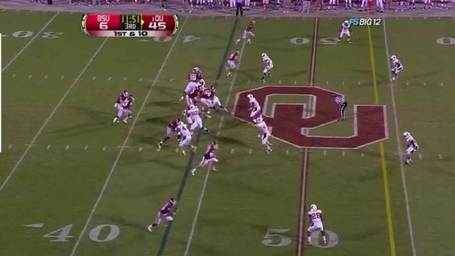 At the snap all four receivers receivers explode off the line down field causing the defensive backs to hold their positions and do their best to identify their routes. Broyles is getting jammed at the top by a linebacker but look at the cushions that Stills, Ratterree and Reynolds have. The play-fake to Brandon Williams causes the linebackers to step up which would open the field for a middle route. 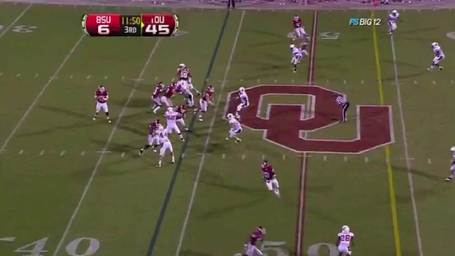 At the top Kenny Stills cuts in and will come behind the linebacker who jammed Broyles. Broyles is released into bracket coverage at the top but the defense has trouble at the bottom. Ratterree notices that both the safety and corner are backing up into coverage and he cuts outside into the flat where he is wide open. This would be the "hot" route if the defense was blitzing or getting pressure but because there is time the play develops a bit longer.

Notice the bottom corner has his back to Reynolds. This should be an indication to the safety that he is releasing the outside receiver to deep coverage. Reynolds notices and cuts to a deep sideline route, outrunning the safety in the process 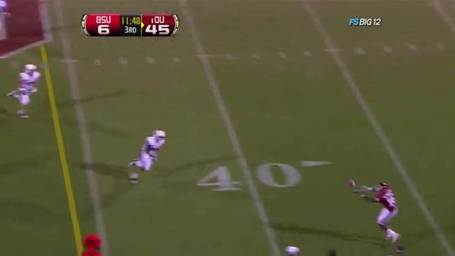 The result of the play is a wide open Jaz Reynolds and a 56-yard touchdown pass.
Obviously the Texas secondary is a lot better than Ball State's but the point here is that all four of Oklahoma's opponents this season have struggled to stop the Sooner passing attack. Broyles and Stills are still catching a ton of passes despite the attention they are drawing and Oklahoma's third and fourth receivers are capitalizing as well. Reynolds is averaging 23 yards per reception, Roy Finch 14 yards and Trey Franks 10 yards.
Giving up just 178 yards per game, Texas has the best pass defense in the Big 12. However, Oklahoma is averaging 378 passing yards per game and has the Big 12's second most potent passing attack. Something's got to give right?
Its been said that great players make great coaches. While there is some significant truth to that I would say that its also a vastly incomplete statement. Coaches have to know how to use great players in order to maximize their full potential. Bob Stoops has one of the greatest (if not the greatest) receivers in NCAA football history and the Oklahoma coaching staff has put him in exceptional position to succeed. With the supporting cast they've built around him this weekend should be no exception.