Two staples of Kansas State's 7-0 start to the season have been special teams and defense. If the Sooners were going to rebound for last week's loss to Texas Tech then it would have to come by way of scoring against the Big Twelve's second best scoring defense. Considering the struggles the Sooners faced the week prior against Texas Tech, who has one of the worst defenses in the Big 12, scoring on Kansas State didn't seem to be an easy task to anyone.

To their credit, Oklahoma's offensive coaches went back to the drawing board and came out with new and creative wrinkles to throw at Kansas State. From the Red Zone to the other end of the field Oklahoma showed an aggressive and creative approach that the Wildcats had yet to see, either in another opponent or on film. The new attitude was clear on the first snap of the game. With leading rusher Dominique Whaley lined up in the backfield, Roy Finch came out of the slot and took a jet sweep for an 11-yard gain,

Unfortunately for Oklahoma, Whaley was lost for the season on that play due to a broken leg that occurred when a KSU defender was rolled up on the back of his leg. While the loss was catastrophic to OU from the standpoint that there may not have been a better success story on the field this year than a walk-on leading the team in rushing the Sooner offense remained undaunted and unstoppable. 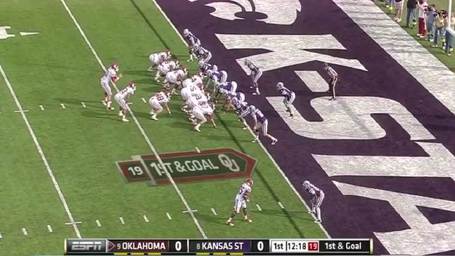 Oklahoma pushed that opening drive to the KSU 1-yard line. There they came out in the above formation on first down. Freshman quarterback Blake Bell is lined up in the shotgun with two fullbacks in the backfield with him. Bell would walk into the end zone untouched on this play by taking the ball right up the gut of the K-State defense. Another thing to notice is that this formation brings 10 Wildcat defenders up close to the line and leaves Ryan Broyles in single coverage at the bottom of the screen. Pretty sure we'll see this formation again. 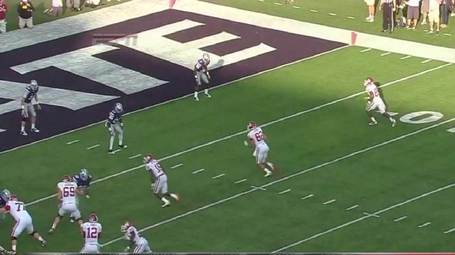 Another thing Oklahoma did on Saturday was run multiple plays from a three-receiver set. They ran the ball several times from this formation (Jones is working play-action to Finch at the bottom of the screen) and also passed to multiple receivers from the trips set. That's Ryan Broyles on the outside, tight end James Hanna in the middle and Jaz Reynolds on the inside. Reynolds has a touchdown catch on this play. 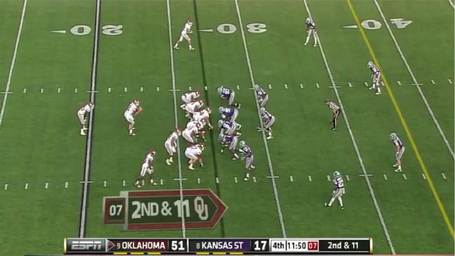 Check out this formation! That's speedster Trey Franks at the top of the screen, Roy Finch in the backfield, fullback Trey Millard in motion directly behind tight end Trent Ratterree and Ryan Broyles in the backfield on the lower hash. This ends up being a pass play to Broyles which results in a first down with both Millard and Ratterree leading the way as blockers after Broyles makes the catch as you see below. 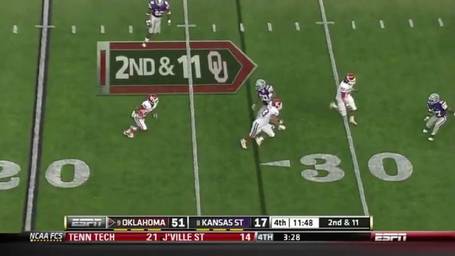 The end result was a record breaking day for Landry Jones who had 505 passing yards with 5 touchdowns. The Sooner offense racked up a total of 58 points and 690 yards of total offense. Definitely an A+ for the coaching staff!

Quarterback - Jones threw two interceptions. One was when he never looked off his receiver and the other was an under thrown ball. Outside of that a school record 505 passing yards to go along with 5 touchdowns is pretty exceptional. Overall Grade: B+

Running Back - The loss of Dominique Whaley was gut wrenching but Roy Finch was really good filling in as the feature back. He carried the ball nine times with an average of 8.1 yards per carry and also caught seven passes out of the backfield with an average of 9.9 yards per catch. He scored on a 31-yard run and fullback Trey Millard scored on a 61-yard run. Overall Grade A+

Receivers/Tight Ends - Another thing that Oklahoma did on Saturday was look for the tight ends more often which is something we've longed to see for a while. The receivers were amazing with Broyles topping out at 171 yards and a score. Jaz Reynolds had two of the most incredible catches you'll see all season. Overall Grade A+