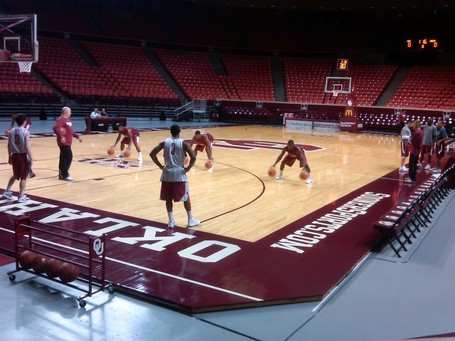 Oklahoma officially begins their 2011-12 basketball campaign Tuesday night when the Sooners host Northeastern Oklahoma in their first exhibition game. I was able to catch the team's practice on Thursday afternoon and wanted to share a few thoughts on how the team seems to be progressing.

The team practiced in two segments with the guards going first and then the "bigs" followed. The entire team wasn't on the floor at the same time to which Coach Kruger explained to me after practice that it was a bit different than normal and the first time they've done practice this way. He said they the team had been going at it really hard and he wanted to change the pace a little bit.

Some of the guys who stood out in the first session were Cameron Clark, Sam Grooms, and Carl Blair. Clark has noticeably added some muscle to his frame and I can tell you he's every bit as athletic, if not more so, than he was last season. He's got the hops to finish a drive with a fantastic dunk and the range to score from anywhere on the field. He seemed to move very smooth both with and without the ball.

Grooms has a good shot and a stocky build. I'm not completely sure where he'll end up but he seems to be able to play either the one or the two. He has good ball handling skills, took inside and outside shots and appears to be physical enough for Big 12 play.

Obviously Blair has a handle on the point position, which causes me to assume Grooms could be the two, and it showed in practice.

When the "bigs" took the floor the most noticeable thing was that Romero Osby and Andrew Fitzgerald seem to have developed some good chemistry. Fitz has a nice mid-range shot as seen in the video above and can still work down low. Osby appears to be a legit inside/outside guy. He did everything from dunking the ball to hitting a shot just inside the three-point line.

JUCO transfer Casey Arent is clearly the biggest player on the floor and will prove to be a legitimate center at 6-10/235. I would have liked to have seen a scrimmage type situation where his size was matched up against the athleticism of Osby and Fitz.

Speaking of athleticism, Barry Honore showed that he's clearly got it by finishing plays several times with dunks.

All that said, the most impressive player on the floor for Oklahoma was Amath M'Baye who transferred from Wyoming. He's the only player who worked both sessions and stood out each time. He's athletic enough and has the ball handling skills to play with the guards (like Cam Clark he's a forward) and a smooth jump shot. He also has the height and hops to get inside and make some noise.

When the guards were done he worked on jump shots while the "bigs" were warming up and then went to work with them. Even among the likes of Osby, Fitzgerald, Arent and Honore he stood out. What I liked best about M'Baye was that practice ended after the "bigs" were done and while I was visiting with Coach Kruger for a brief moment following their dismissal, he was still on the court working. When I pointed that out to Kruger he told me that he thinks he has a special player in M'Baye. Unfortunately for Sooner fans he'll have to sit this season out for the NCAA transfer rule.

Coach Kruger also told me that he's pleased with the way the team is coming along and the team is "almost" ready for their first game Tuesday night.