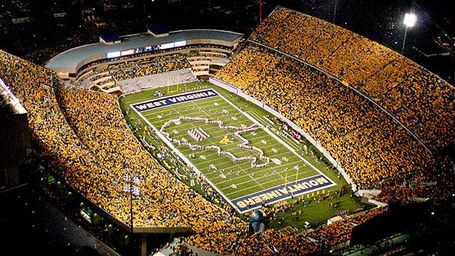 It's been awhile since I have written anything on Conference Realignment mostly because nothing new and concrete has actually happened to affect OU and the Big 12 since the Big 12 added TCU, but the winds they seem to be a blowin' and I figured I'd catch some of you up that don't follow it too closely (or review it for those that do)

IS MISSOURI STAYING OR GOING?

That right now is the big question.  It is the question and answer upon which hangs the fate of several schools conference affiliation as well as even the possible survival of a conference.

Last Week acting Big 12 Commissioner Chuck Neinas said after the conference added TCU to the 2012 schedule that the conference had its 10 teams and no one was leaving for next year.  This apparently came as a bit of a surprise to the SEC who needs a 14th team and to Missouri as well.

I would assume by that statement that Neinas is planning to hold Missouri to the league for next year, even if they withdraw from the league.  The last day for notice is June 30th for the following year.  That is to keep last minute defections from messing up the other schools scheduling.  The league worked out (or IS working out) to allow Texas A&M out early, mostly as A&M just refused to abide by that deadline.  It is questionable if Neinas will be able to hold Missouri to staying in 2012 or not.

The latest and biggest rumor is that Missouri now has the SEC votes to join (supposedly, Alabama switched their vote to yes when they got their wish that Missouri join in the East Division) .  It is widely being reported that Mizzou will be announcing any day that they are withdrawing from the Big 12.  Then a few days later it is assumed they will accept an invitation to join the SEC as the 14th school.

The question of 10 or 12 and who those schools to be added will most likely, be decided by the Big 12's TV partners.  That's a nice way of saying, this is all about the money and those writing the checks will get to have the final say.

BYU:  It was rumored a few weeks ago that BYU to the Big 12 was dead, and the conference was moving on.  Two big sticking points came up.  1) BYU wanted more re-broadcast rights then the conference currently gives to member schools.  They wanted to re-run sports on their BYU channel.  This is owned by the TV networks.  UT balked at BYU getting a better TV set up deal then they got!  2) The next sticking point was Sunday sports.  BYU doesn't play them, and the TV partners looked at that as limiting their programming choices and inventory availability.

However, the latest rumors is that the Church of Later Day Saints that runs BYU has changed its demands and are back talking to the Big 12 Conference.

Many now assume BYU will be a Big 12 member.  They could also join as quickly as next year if Missouri does leave the Conference hanging.

LOUISVILLE:  It is assumed that Louisville is next on the Big 12's list.  They are state school in Kentucky and a major basketball program.  They have a new football stadium that is expandable.

West Virginia:  West Virginia brings a top basketball program and a solid football program.  They have rabid fan base, and they totally dominate their market.   Downside is they are long way from the Big 12 region and their TV market is pretty small.  However they are one of the few programs that are on the level of the Big 12 schools currently in football.

CINCINNATI:  If BYU doesn't join many speculate and assume the Bearcats would be #12.  I'm not sure why besides they are a bridge between Louisville and West Virginia.  They were a basketball program, but not so much lately.  Their football program plays in a tiny old stadium on campus.  While they are in a big TV market, no one in that market cares about the Bearcats.

ARE THERE OTHER POTENTIAL CANDIDATES?  A: No..not really, but here's some I've heard:

TULANE:  Don't laugh but ESPN actually threw out the Green Wave last week.  OK...now you can laugh.  They draw less then 10k to the Super-dome.  While they are in a new market and an AAU school, they simply aren't Big 12 level in size or following.

HOUSTON:  Heard them thrown out a time or two.  They would strengthen the Big 12's present in a critical city somewhat.  However, many schools are worried about being too Texas-centric.  Also UT doesn't want to share turf, and have other schools as their conference "equals" (shocking I know)

BOISE STATE:  Nothing serious on Boise.  They have issues with academics, size of the Community College.  Also it's assumed if the joined the Big 12 they wouldn't be allowed to bring in partial qualifiers and their talent would tank.  Then we have a glorified community college with no market and a bad football team.

USF and UCF:  This is a pair of schools in Florida that are both in the top 10 largest enrollments in the nation, both are growing fan bases because of it.  There has been a lot of internet chatter and support on boards for these two schools to join the Big 12, but I've not heard anything from a major beat reporter on them.

NEW MEXICO:  I've still maintained that this would be good local state university to add.  They are a top draw in attendance for basketball, and they just redid the PIT.  They also rank higher academically then OU does on the AAU listings (which they are not yet a member) as well as USA-Today and Princeton Review Rankings.  They are also a rival of Texas Tech.  I've even said that compared to Colorado New Mexico isn't that far below CU.  BUT....I've never seen their name come up in any serious listing of potential candidates.

HAWAII:  Well mostly because I can post pictures like this one, and dream of following my Sooners to the Aloha State: 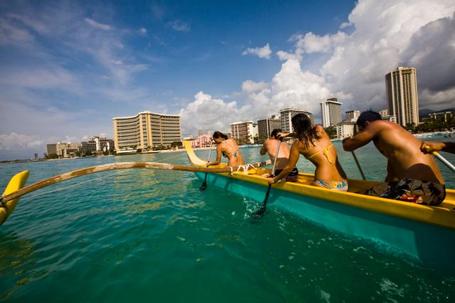 WHAT IS THE BIG EAST GOING TO DO?

It was rumored that the Big East was looking to expand, and their commissioner even said they wanted to get to 12 teams.  But it seems that some of their targets have not jumped to join them specifically Navy and Air Force, which were the key schools for the Big East was targeting (along with UCF, SMU, Houston, Temple and Boise State), and if the Big East lost Louisville and West Virginia and maybe Cincinnati then the Big East might just drop football as they would be down to UCONN, Rutgers, and USF as football schools at that point.

Jon Wilner of the San Jose paper had a tweet Wednesday that I think sums it all up:  Source: Next 7-8 days "momentous" for Big East, Big 12

Yes, it very much could be....course we've heard that before haven't we?

My Prediction: By Thanksgiving, Missouri will be heading to the SEC, and the Big 12 will have BYU, Louisville, and West Virginia as new members. I also predict an East/West split to the Big 12 and not North/South.