The half way point of any season is always a good time to look back though the first half of the season and assess how things have gone.  What better way to do that than by handing out some super (un)important mideason awards.  As usual here at CCM, we'll give you our picks then we want you to chime in with your comments for who you would choose for the respective awards.  First up, Offensive MVP.

With an offense currently ranked #4 overall in the country, putting up 173 rush yards and 373 pass yards (on average) per game respectively, it won't be easy to narrow this down to just one player.  But that's why we get paid the big bucks, so despite the difficulty we'll take on the task.

Everyone has their own definition of what MVP means to them, we all know this, so we won't waste your time trying to convince anyone that one is better than the other.  Under the conventional sense, I think most would approach "most valuable" as what would your team look like without 'Player X.'  Makes sense and certainly a valid argument.  Based on this approach, the obvious pick would have to be Landry Jones.  Sooner Nation doesn't even want to try and picture this team, more specifically this offense, trying to run at their high octane level without the mustachioed one at the helm (and why would they!).  There is almost just as compelling argument to be made for the now NCAA receptions leader in the great one, Ryan Broyles.  He draws so much attention, creating opportunities not just for his fellow WRs but also for the offense as a whole.

Kenny Stills seems to make at least a couple "big" plays in every game.  The bigger the moment, the bigger he comes up in that moment.  Dominique Whaley has come out of nowhere to lock down the starting RB job and proven to be more than capable in the role.  Finally, there is Gabe Ikard who has filled in for an injured Ben Habern better than I think anyone could have expected.  He was playing at a very high level at left guard before shiting over to center and despite never having played the position, has continued his stellar play.

And the winner for Offensive MVP is . . .

Dominique Whaley- In our first shocker of the night, Whaley gets the nod over the heavily favored Landry Jones.  Look, if there were two awards or a Co-MVP (we don't do cop outs) then Landry would be up on the CCM stage right now accepting his award right along with Whaley.  This isn't a knock on some of the struggles Landry has had at times through the first half.  It's more about what Whaley has brought to this offense and the fact that, at least it appears, that without him this team would very likely be strugg-a-ling to run the ball.  Heck, even with him they've struggled to do so at times.  So while the offense would undoubtedly be in very rough shape, I think there is also a pretty compelling argument to be made that the same could be said as well were they to lose Whaley.

Several of these guys are the ones who do the dirty work, the stuff that won't show up in a box score.  They don't get or need the limelight, but if they didn't excell at what they did you would notice in a hurry.  Millard, Stephenson, and Johnson are all guys who show up every Saturday and just do work.  Stephenson and Johnson up front, have been two of the better offensive linemen through the first half and Millard, well if you don't appreciate all the things he does in a typical game do yourself a favor next time OU plays.  Record the game, then go back and watch and just focus on #33 for a couple offensive series.  Then there are a couple skill position players who have made some plays, but are maybe still kind of flying under the radar a little bit.  Clay hasn't had those "Wow" moments yet this season, but he is as steady as they come when he's healthy.  A big part of why he was playing before his injury was because of how much the coaches trusted him to be assignment sound.  Reynolds is a kid who is certainly making the most of the second chance he was given.  If he can continue in the second half what he's accomplished in the first, it will have been a very successful 2011 campaign for the sophomore WR.

Lane Johnson- They were all deserving, but honestly I'm not sure how this could go to anybody else.  Who on earth could have expected a kid who came to OU a couple years ago as a former JUCO quarterback to now be a starting right tackle?!?  There are certainly moments throughout the game where Johnson looks like the first year lineman that he is, but more often than not through the first half he's proven to be a quick study and able to take advantage of his athleticism few o-lineman possess.  There is no reason to think he won't continue to get better as he gains more and more experience as the season plays out.

Now, we'll switch sides of the ball and hand out some defensive awards.

Could you go wrong picking any of these guys?  I think not.  Lewis is the heart and soul of the defense, Alexander is the senior leader and having an incredible season, Wort has improved immensely since last year, Fleming and Hurst are proving Sooner Nation's preseason claim of owning the best CB duo in the country, and then there is The Hammer.

Frank Alexander- This may not be the popular choice, I'm assuming that would be #28, but Alexander has been a freaking beast at DE this year.  Heading into the season, there was some concern not just with the DTs but also with the DEs.  Ronnell's eligibility issues, some depth concerns, and the fact that Alexander, while solid, had never really provided that consistent pass rush threat.  Well he's been all that and more through the first six games, he leads the team in sacks with six and a half.  I'm sure he'd agree that all of the other nominees are worthy candidates, but Alexander has been a force up front and his pressure on the QB has caused all kinds of problems for OU opponents.  And getting that kind of pressure on a QB makes things easier for everyone on the defense, so that's why Big Frank gets the nod here.

Again, another loaded category with multiple well deserving candidates.  Colvin has handled his transition from corner to safety as well as anyone could have hoped, Walker has been a beast at DT, King is the first DE off the bench and versatile/big enough to play inside on certain downs, Washington has come out of nowhere and is actually starting to live up to the hype he came in with, Nelson seems to be really coming on as of late, and Bird has filled in quite well at MLB the last two games.

Aaron Colvin- I'm not gonna lie, I struggled with this one.  I could have very easily given this to Walker or Washington, but I decided that Colvin's exceptional play thus far has just been too much not to give him the award.  Maybe I'm wrong, but in my opinion Colvin (much like Hurst actually) is a guy that is rarely if ever out of position and yet just as rarely gets the proper credit for his outstanding play.  He's undersized for a "traditional" safety, but has zero issues defending the run game.  As a former corner, he's got cover skills most safeties don't possess so he is comfortable defending WRs and/or TEs.  The kid is just an exceptional football player who is constantly making plays and rarely out of position. 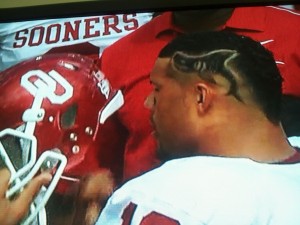 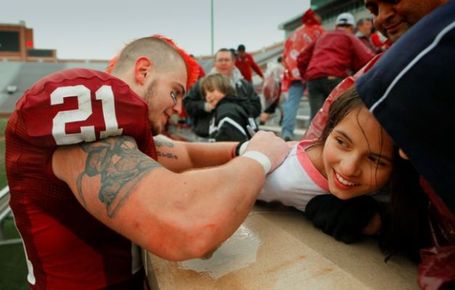 (Yes, I know this is an old pic and he's not rockin' the red anymore but the mohawk is still there) 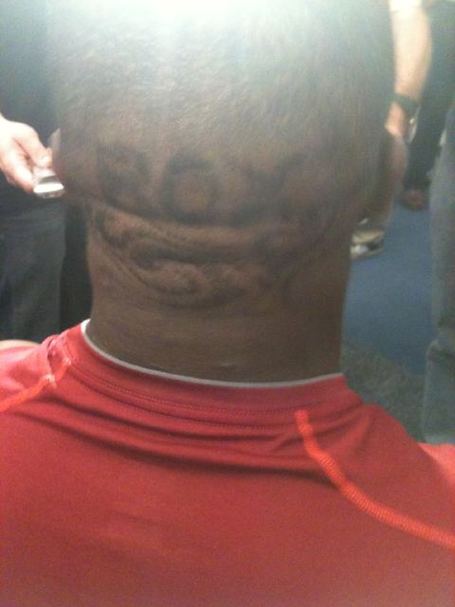 Demontre Hurst - I mean the other two are cool and all, but how can you not go with the Box tribute?

So there it is people, your OU Football First Half Awards.  Like I said, plese add your take in the comments below and feel free to throw up some more categories as well.  Have fun with it, I know we did.