After Oklahoma State's slaughter of a JV Kansas squad we've seen the Sooners slide a bit in some of the Big 12 Power Rankings. Granted the Cowboys have been phenomenal to this point in the season and are legitimately a Top Five team this season I think a lot should be said about schedule strength. Oklahoma's got it and OSU not so much. We wouldn't expect a basketball blog to understand that though.

1) Oklahoma State: So far this year, the Cowboys have just been better than the Sooners. They are among the top three the country in passing and have the best overall offense in the country by scoring more than 50 points three times this season. Only three teams stand in their way and one of them is their next opponent, Texas.

2) Oklahoma: Oklahoma will still be the apple of the nation's eye. They manhandled the Longhorns with a 55-17 "Texas style beat down" and should be able to do much worse to Kansas next week. - Big 12 Hoops

Let's call a spade a spade here. Either the Texas A&M defense is faking injuries or they are the worst conditioned athletes in the Big 12. Either way they should be thoroughly embarrassed! They have been dropping like flies against OSU, Arkansas and Texas Tech. Perhaps they think they're playing futbol instead of football because the way those guys flop on the ground and writhe around in pain only to come back two plays later they could be soccer stars.

"I take offense to it," an angry DeRuyter said of the notion his players would feign injuries to try and slow an uptempo offense like Tech's. "Because we absolutely, without question, never teach that, never coach that, never talk about that." - MySA.com

Oklahoma got to hate on Texas all week last week and then completely embarrass them in the Cotton Bowl by a final score of 55-17 (actually could have been much worse). Now its Oklahoma State's turn.

Last Saturday, two University of Texas Quarterbacks played in the Red River Shootout (political correctness be damned, "Shootout" sounded a lot cooler and if it perpetuates gun violence between OU and Texas fans, all the better) and both of them were...eh, "mediocre" would be kind.  They sucked; "sucked" is really the word that should be used.

Case McCoy and David Ash shared more than just the field last Saturday combining for a paltry 223 passing yards (well under Laundry Jones's 337 yds), they also had to split ONE WHOLE TOUCHDOWN between themselves all game.  The gruesome twosome combined for four turnovers, two on McCoy fumbles and two on interceptions thrown by Ash.  Instead of these two turd QB's canceling each other out like so much Algebra, Texas lost 55-17.  - Cowboys Ride For Free

A week after getting demolished by the Oklahoma State Cowboys the Kansas Jayhawks are preparing for the arrival of the Oklahoma Sooners. Talk about unfortunate scheduling!

Oh no.  Here we go again.  Up this week the number one team in the country.  The good news is that they are actually a slightly worse offensive team than last weeks Oklahoma State Cowboy opponent.  The bad news is that they are still a top ten offense and after they finish with this weekends game there is a chance they could gain some serious ground on the Cowboys.

Either way it's our Kansas Jayhawks and the Oklahoma Sooners on the docket this weekend.  The Sooners are a National Title hopeful and Kansas is in the middle of a rebuild or tear down depending on what side of the fence you choose to sit.  I will say that while it may not be pretty I encourage you to head out, enjoy a nice Fall night in Lawrence Kansas and at least give the team a little encouragement to keep the grind going. - Rock Chalk Talk

After failing to cover...well...anyone last week, the Texas secondary has to gear up for Oklahoma State's pass happy offense. I'm going to go ahead and make an early nomination of Brandon Weeden for Offensive Player of the Week.

When Dana Holgorsen -- the mastermind behind last year's explosive offense -- left to take the head job at West Virginia, OSU head coach Mike Gundy decided to do the only sensible thing and hired the first replacement coordinator in history who was willing to be taught the old guy's system, rather than bring in his own. That's literally what happened, as after leaving the Jacksonville Jaguars Todd Monken spent his first weeks in Stillwater being taught Holgorsen's offense by Brandon Weeden, the team's returning quarterback. Hey, if it ain't broke...

And what exactly is that offense? Besides scary as hell? It's a version of the Air Raid -- "basketball on grass," as it's been described. Like a 3-on-2 fast break, the quarterback leads something of a fast break, reading the defense and delivering a quick strike to whichever receiver has an advantage in space. It's devastatingly effective when everyone's on the same page and executing at a high level. - Burnt Orange Nation

After setting a new standard in welcoming the Aggies to your home field by sprinkling their team bus with smelly goodness, a Texas Tech fan has come up with a new knick name for the departing Aggies.

Due to the wild overreaction and inflammatory tweets regarding the "vandalism" of team buses by the AD down south, Mr. Byrne, I have made a command decision that I have no other option but following through on. - Double T Nation

Anyone need a blueprint for stopping a gimmicky offense?

What do you get when you run a rinky dink gimmick offense up against an aggressive but disciplined, hard hitting defense? You get five forced turnovers, eight sacks for -84 yards, 17 tackles for loss with a grand total of -113 yards and three defensive touchdowns. When summing up Oklahoma's defensive performance against the Longhorns there are really two things that define how the afternoon went. At one point in the game the Longhorns actually faced a 4th and 49 and the 21 points posted by the Oklahoma defense outscored the Texas offense.  - Crimson And Cream Machine 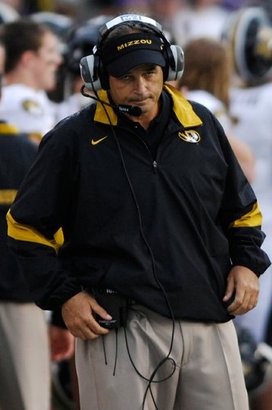 Speaking of Gary Pinkel, Bring on the Cats shows just how he felt after losing to Bill Snyder.