What do you get when you run a rinky dink gimmick offense up against an aggressive but disciplined, hard hitting defense? You get five forced turnovers, eight sacks for -84 yards, 17 tackles for loss with a grand total of -113 yards and three defensive touchdowns. When summing up Oklahoma's defensive performance against the Longhorns there are really two things that define how the afternoon went. At one point in the game the Longhorns actually faced a 4th and 49 and the 21 points posted by the Oklahoma defense outscored the Texas offense.

Facing an offense that relies heavily trickery for success, Oklahoma defensive coordinator Brent Venables had a trick up his sleeve as well. 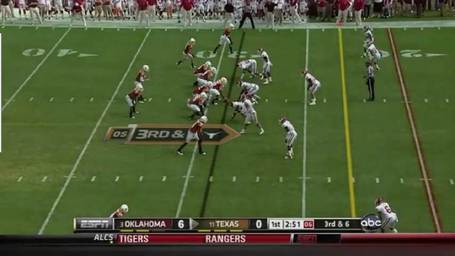 Largely employing a nickel based defense, the Sooners reverted to a 4-3 base defense aimed a keeping Texas running back Malcolm Brown under wraps. As a part of the new scheme Tony Jefferson moved back to safety and Corey Nelson started at linebacker. The result was complete confusion for the Texas offense and complete dominance by the Sooner defense.

Defensive Line - Defensive tackle Casey Walker had an incredible game and not everything he did will show up on the stat sheet. He forced the first of five Texas turnovers and was a disruptive force in the Longhorn backfield all day long. Defensive end Frank Alexander had three sacks and Ronnell Lewis had two. David King spent time at both spots on the line and scored Oklahoma's second defensive touchdown with a 19-yard fumble recovery scoop and score. Overall position grade: A+

Linebackers - Travis Lewis honored Austin Box by wearing the #12 jersey and did it proud with 8 tackles. Tom Wort had seven tackles but a bigger story in the middle is that Jaydan Bird came in for Wort, after he suffered an injury, and recorded six tackles and a sack. Corey Nelson added two tackles and a pass breakup to the linebacker stats. Overall position grade: A