This article is a counter point discussion to JTE'S article on telling UT to stick it where the sun don't shine.  I'm sure JTE hit the Knee-Jerk OU fan reaction on the head there, and there is nothing really wrong with that except it over simplifies the more complex issues going on in the college football, and with the Big 12 teams.  And this is a great starting point to look at the situation. 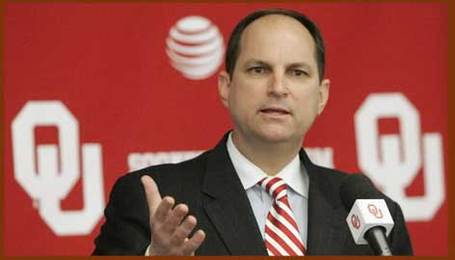 What Should Joe C do now?

From a total money perspective, not really.  They'll make from what I can guesstimate, about $ 6-9 million dollars (give or take a million or two) more a year than they currently are making.  Now for many schools, that's a king's ransom.  Right now, Texas A&M Athletic Department owes Texas A&M University $20 million dollars, which the Dept, had to borrow to cover it's budget short fall a few years back. So...there are Athletic Departments having a hard time keeping up with UT.

However, UT already has the largest Athletic Budget in the country with about $100 Million dollars.  So....$6-9 million dollars more, is really only a 6-9 % increase.  It's not the game changer some would think, as UT already had the same competitive advantage ($$$$$) over every other school in the Big 12 for years....and OU dominated them in the Big 12.

A little background: The Big 12 allows schools to keep TV rights for unused sports.  Only the SEC and the Big East do this of the BCS Conferences.  The Pac-12 and the Big 10+ (and I think the ACC, but not sure) require an "all in" meaning all TV of anything for it's members is owned by the conference and money earned from them are distributed in full equal shares to the member schools.  So, Ohio State and now Nebraska, gets the same money from TV as does Northwestern and Indiana, and USC does with Washington St  (this last one is NOT sitting well with USC as they are talking about going Independent too)

The rich certainly got richer with the UT/ESPN deal,  AND it pushes what is a financial arms race to a whole new level.  The rest of the country's national brands also will be wanting something like this too and will want to keep up with UT.

What about USC, Alabama, or Florida, or Oregon, or Penn State, or Ohio State or North Carolina (to name some other national brands)  Do they deserve their own NATIONAL cable channel of their own?  They all have the same cache as Texas does on the national stage.

This deal separates UT further from the bottom of the Big 12.  Iowa State, Kansas St can't keep up.  If the other national brands are feeling left behind, surely Iowa State, Baylor, just become the Baltimore Orioles or the Kansas City Royals trying to keep up with the New York Yankees.  Will they like the Orioles, quit trying and eventually make the Big 12 a laughing stock?

Is OU better off with a close relationship with UT then with out?

Well, this is THE key questions at the heart of all of this ain't it?

The Big 12 has been a financial boon to OU over the Big 8 days.  OU was bleeding money before, and now OU is one of the few Athletic Departments in the country currently in the black.  OU's total athletic budget is around $80 million dollars a year, and in the top 20 of all schools in the country.

Is that all due to UT and the Big 12?  Of course not as a TON of it has been due to Joe Castiglione and his management.  But understand, UT is a national brand and they are the most popular school in a large and populous state (read: TV eyeballs).  And that is Eyeballs that TV will pay for.  So for Conference TV contracts, the Big 12 NEEDS UT but how much do they need them?

A couple of points need to be made clear before we move:.  X divided by 10 is more than x divided by 12, where X is the same amount.   To make X/10= or < Y/12 Y has to be exponentially greater than X.  Y has to increase more than the amount of X divided by 10.  and each extra division has to add to Y.  Meaning each school a conference adds has to be worth more to Network TV's than the ones added before or the pie slices are smaller for everyone.

So...what exactly do you want OU to do?  What are OU's options?

Before we talk about OU's options, one thing needs to be said, OU has an Okla. St. problem.  OU doesn't want to separate from OSU, and while I think OU COULD, it would be a nasty fight political fight, and OU doesn't want to fight that fight.  President Boran's wife graduated from OSU.  OSU's Veterinary School is named after Boran.  OSU's president Harges graduated from OU Law School. There are ties that bind here.

a:  Join the SEC.  Well, the SEC were reluctantly open to taking A&M and OU this summer, but they didn't want Okla. State.  I mean you can say to your wife or girl friend, that you are leaving her to go live with Oklahoma's own Ashlynn Brook but if she's not available, then you really don't have that choice?

For the record, how it went down this summer, was A&M got the SEC to agree to take A&M, but the SEC wanted A&M to get another school, and they wouldn't take Missouri. A&M came to OU, and OU said, "We have to bring OSU too"...which the SEC said no thanks to, but said they'd approve OU and A&M, IF CBS and ESPN gave extra money.  ESPN was wanting to keep the Big 12 together said, they wouldn't pay more, and CBS said, they might consider it but would have to look at numbers and take time...which no one had this summer.

If the SEC would have OU and OSU, I'd say go for it.  More money, more athletic prestige, a more stable conference.  PLUS an automatic spot for the Conference winner in the BCS championship game.....all would be great for OU. 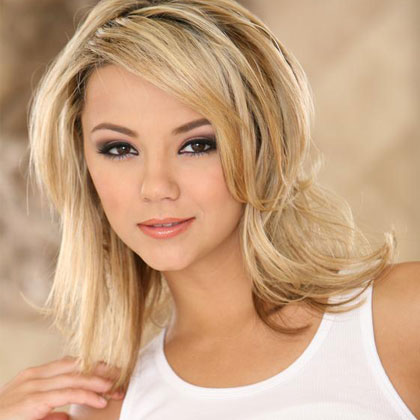 She doesn't want to date you if Little Brother sleeps on the couch.  It's not a choice if it's not an option.

The Pac-10's current TV deal is SO bad, that adding OU along with OSU could still be a positive addition to them where it wouldn't be with with the SEC.  Of all the conferences out there this is OU's only other choice, and even then it has drawbacks.

However, OU didn't like the "all in" aspect of the Pac10 this summer.  It was OU among all the schools, this summer, that shot the Pac10 deal down (along with A&M).

c: Lead a Big 12 revolt and kick UT out of the Big 12 and replace them with BYU.  Grow a pair, eat some money and vote UT out.   The Big 12, then could add, BYU to return to 10 teams and when their TV deals come up, would now be negotiating with BYU as the 2nd national brand along with OU.

How much money is UT worth to the Big 12 TV deal and to each school?  Well, Millions.  How many Millions would be interesting to know.  It is estimated, that the networks see UT as much as 40% of the total value for the Big 12 Conference, OU 12.5%, A&M 12.5 %...and the rest of the league 35%.  (these are ball park numbers and guesses I read somewhere when the conference realignment came up).

You might not like, it but UT is worth more eyeballs than any other school.  And TV pays for eyeballs.

To kick UT out of the Big 12 would cost OU about $9 Million Dollars a year on a future TV deal!!!!  Now OU might be able to live with this pay cut, but could enough other Big 12 schools be able to do this and vote UT out?  No way.

Flipside: Does UT want out of the Big 12?  Some say yes.  Their schedule takes a hit, but not much.  UT fans assume, UT would still play OU and A&M every year, and those are the 2 big TV draws for UT now.  OU could NOT play UT, and that would hurt UT...but it would hurt OU the same.  Scheduling teams to play when other schools are in conference play will be tough.   UT actually would earn MORE money as an independent then they would in the Big 12, and their 2ndary sports would join the WAC or the Sunbelt. They no longer have to pay for those "sucking at their Teet" as UT president said this summer.

From a straight money question UT benefit from independence.  If we are playing "Keep up with UT", we'd actually fall further behind, if UT went Independent.

d: The fourth option is this:  Demand "all in" by all schools in the Big 12, including OU and Texass.  Meaning, ALL TV rights now belong to the Conference, and not to the individual schools.  Take the National Deals, PLUS all the other money like the ESPN/UT deal from all the schools and throw them in one pot.

That would equal all the TV money amongst all the schools.  That would a HUGE wind fall for Baylor and Iowa State, and Oklahoma State.  OU, would be giving up money too.  Not as much as UT,  but OU WOULD be giving up money. So this option does cost OU money.

I should point out that this is what Nebraska wanted after they started figuring out that UT, and OU was making more money then they were.  OU balked at this idea this summer, not because they were UT's toadie, but because it would have cost OU money too.

Personally, I think this would be interesting move as I think it strengthen's the conference as a whole, and especially the weaker members. OU would lose money that's true, but not as much as UT.  It would also give the PERCEPTION, that the conference is a conference of equals, and not UT and her 9 Byatches.

That is unless, this forces UT to go independent and it could. This gives UT the political cover and could be the argument they are looking for to take to the Texas Legislature, to let them walk from the Big 12, something I don't think they have a snowball's chance in hell, at the moment.

So....Bottom Line:  OU makes more money WITH UT then OU would make without them, even if they are pompous asses.

Athletic Directors have bills to pay too.  We are all looking at ways of making MORE money, not less, even Joe Castiglione.