The long awaited announcement came from the the Evil Empires of the University of Texas and ESPN for their new TV deal.  According to the Austin Statesman, Bevo-tV could be on the air as soon as this fall.

The University of Texas has struck a 20-year, $300 million deal with ESPN for a new, 24-hour network that will broadcast Longhorn sports and some non-athletic content such as campus musical performances.

But after the big headline, like all things, the devil is in the details.  This deal also includes IMG-college.  They are a marketing firm that holds the rights to UT's Radio and Stadium Advertising right now.  They will get 17.5% with UT getting the other 82.5 % so that works out to $12.5 million on average for UT. 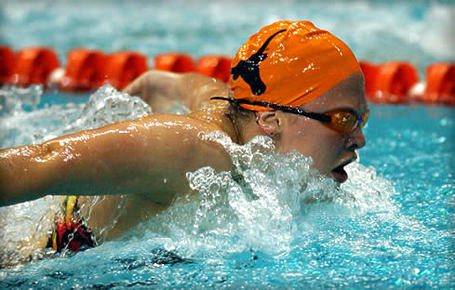 (is UT swimming something you want to pay to see?.....ESPN seems to think so)

Initially UT is promised $10 million per year for the first 5 years.  It looks like after that there is increases and buy outs through out the deal, and I would assume that's on a 5 year basis.

Currently the Big 12's media deals net each school between $13-$15 million per year, and this deal does not affect that at all. The Big 12 and it's current contracts have first right of broadcast, meaning they get first choice.  Right now, the Big 12's media partners are ABC, ESPN, and Fox Sports.  Games not picked up by the Big 12 media partners then revert back to each school and each school can then resale them. (the Big10 and the 12-Pac have "all in" agreements meaning the league owns all rights to all sports, all the time for TV)  Also under current Big 12 media agreements, schools also hold the rights to replays of any game.

The Channel will be offered nationwide, but it will probably be on a sport tier or as a pay individual channel, except in local Texas markets where the channel will be free (that doesn't mean free to the cable companies!)

So, Bevo-tv can put on the football games not broadcast elsewhere, and that's usually one or two games a year and the crappy ones at that, plus football reruns, Men's and Women's Basketball, and the other "Olympic" sports, like swimming, baseball, gymnastics, etc.

At first glance, $12.5 million for secondary sports seems excessive, and it is, just not as much as you think.  The key is the IMG-College part.  If that includes Radio, Stadium Advertising, and Internet, which IMG-College currently has as a package deal with UT, this deal is actually similar to Ohio State's deal for $11.5 for their radio and stadium advertising they struck this summer.  (For reference, OU, has separate deals for Radio, and do their Stadium Advertising in house, and I saw something this summer that those brought in about $7-8 million for the school.  Sorry no link, just off of memory)

If IMG-College is just getting bought out of their rights/contract and their payment is just a replacement of their profits from the UT deal, then $12.5 for UT isn't much extra at all as it would include money already being earned by their current deal with IMG-College or about $ 4.5 million more than OU currently gets.  This is in line with the $3 million estimate that Bevo-TV would bring in when it was first proposed this summer.

What's next?  Look for the Big 12 to put together their own Cable Network minus UT.  They would still have the Houston, DFW, OKC, KC, STL, markets, plus combined there is more demand nationwide, than the 1 million UT alumn's could have.  I would assume, a TV deal for the Big 12 would generate about $2.5- $3 million per school, or about $2 million less than UT's deal.  The Big 10 Network has been a huge success, and others will want to copy it.

Now, this deal does represent something else, and that is the current chess game being played by 2 factions vying for the future of college football.  One side has Fox and a Playoff System, and the other Disney Corp (ABC, ESPN) and the current bowl system who own all the rights to the current bowls, which will be about as important as the NIT if their is a Playoff.   One of the big national pieces in this battle is now squarely in the Disney Camp.

IMG released a press release, in which they say:

So...the part that they are giving up is the Media Rights for the 2ndary sports.  UT will receive separate money for radio and internet, however, the "sponsorship/Advertising inventory" can be ads on radio, game program books or in stadium advertising or it might not.

BUT WAIT there is more:

OU announced they are working on their own network as well from the Tulsa World.  The key to this is OU currently has a Multi-Media Rights deal with Learfield sports which currently generates $7.5 for OU.  This I believe includes radio but does NOT include stadium advertising.

SO...comparing apples to apples, UT's deal with Radio will be for the first 5 years, assuming radio is worth $2.5 million, and UT's guarantee of $10 million a total of $12.5 million (goes up after 5 years).  to OU's current $7.5 million Learfield deal.  Which means this deal is really $5 million more than OU gets.

Final updated thought:  Does Cable really have band width for 60 or so college networks?  I mean, USC will want one, so will Florida, and LSU, and OU, and Nebraska, and Ohio St, etc, etc.