Share All sharing options for: Weekly BCS Briefing: Week One

I'm hoping to make this a regular feature here on Crimson and Cream Machine - a weekly breakdown and analysis of the BCS Rankings. However, until the BCS rankings are released on October 17, 2010, we'll have to do a little sleuthing to approximate how teams would stand in BCS rankings if they were released today.

You can compare my results to the simulations they run regularly over at BCS Evolution, another SBNation blog. They used a similar format to mine, except it looks like they substituted the AP Poll for the Harris Poll straight up in the simulation, which I'm going to refrain from doing.

Here are the components to the BCS Formula:

Harris Poll (1/3 of final score): the first Harris poll is not released until September 26, 2010. A team's score in the Harris poll will be divided by 2850, which is the maximum number of points any team can receive if all 114 voting members rank the same team as number one overall.

Coaches Poll (1/3 of final score): a preseason Coaches poll was released in August, and the poll will continue to be updated weekly the day after the final game through the conference championship game weekend. A team's score in the USA Today poll will be divided by 1475, which is the maximum number of points any team can receive if all 59 voting members rank the same team as number one overall.

Computer Rankings (1/3 of final score): the computer rankings percentage is calculated by dropping the highest and lowest ranking for each team and then dividing the remaining total by 100, the maximum possible points.

You then take the percentage scores from each component, average them together, and get a BCS score that will be anywhere from 0 to 1, and most often some sort of decimal. My calculations, after the jump!

With the Harris Poll not yet released, two of the computer rankings not yet released, and the Colley Matrix not providing useful results yet, I decided to limit what I factored into the calculations for the first few weeks. In this case, I will calculate a percentage from the Coaches Poll component. I will also calculate a percentage using the three available and useful computer rankings, without dropping the highest and lowest rankings. The "Massey MOV" was substituted for the "Massey BCS" as the latter has not properly calibrated itself with enough games in the season thus far. I then averaged the computer and Coaches components to achieve the "Mock BCS Rankings".

Note that in the spreadsheet below, a value of 25 is assigned to the highest ranked team, 24 for the #2 team, and so forth. For instance, in this week's Coaches Poll, Boise State is #3, which corresponds to a value of 23 in the BCS calculations. 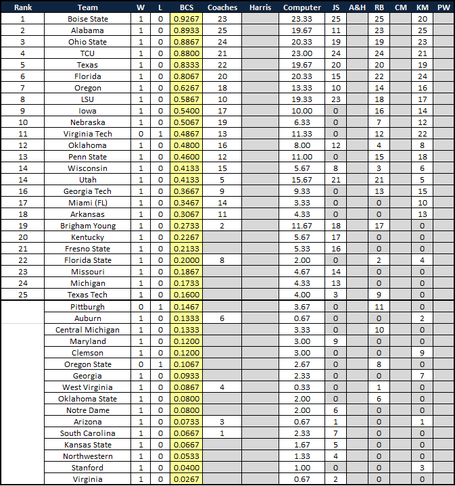 As you can see, based on what's been released so far, the BCS rankings would probably put Oklahoma around #12, which I think is completely fair based on what their preseason expectations and rankings were, and their less-than-stellar performance against Utah State. It just so happens that this ranking is only 2 spots below the Coaches poll, thanks to the Sagarin and Billingsley Ratings being harsher on the Sooners.

BCS Evolution has a good point about "clustering"

The most important thing now is which teams each team is grouped with, based on large gaps in the BCS average. The first cluster of teams represents the main stream NCG race.

I would tend to agree with this assessment, although I would add that the first week of data is highly biased by the perceived quality of the opponent, particularly by the computers. The "Elite Cluster" right now appears to consist of Boise State, Alabama, Ohio State, TCU, Texas, and Florida. There's a significant drop off in the BCS score from Florida to Oregon.

I'm going to refrain from putting anyone into a grouping of "National Title Contenders" this week, and probably until the Harris Poll is released, as the BCS rankings will be in quite a bit of flux until then.

What To Take Away From This As A Sooner Fan

The big takeaway message is that the Sooners are still in the thick of the hunt, but have some work to do in order to get back in the good graces of the rankings. Wins against Florida State and Texas would go a long way to solidifying a top ranking, even if the Sooners blow another game somewhere along the line. Beyond Florida State, OU's non-conference schedule is a little shaky this year, so a win against Florida State could be key. However, the other non-conference opponents are still valued somewhat decently by the computers: Utah State (Avg Rank #84), Air Force (Avg Rank #55), Cincinnati (Avg Rank #51).