Share All sharing options for: Let The Debate Begin...Again

In what will probably be labeled as another "instant classic", Boise State topped Virginia Tech at FedEx Field in Landover, Maryland Monday night 33-30. The "structure of the game" actually paralleled the 2007 Fiesta Bowl, in that Boise State jumped out to a big lead early, the other team fought back to lead the game with about 2 minutes left, and then Boise State charged back for victory.

Of course, this result has huge implications for the college football world. Boise was already ranked #3 in the Preseason AP Poll, and #5 in the Coaches Poll. But, as we all know, with the BCS the human polls are only part of the equation. The 6 computer rankings are factored in, with the low and high value thrown out, and then averaged together to get 1/3 of the BCS raw score. Last year, undefeated Boise State was ranked dead even by the computers with a 2-loss Oregon team who they had beaten at the beginning of the season! (This is important!)

So, quite simply, this victory does not automatically pencil Boise State into the National Championship Game. The Broncos will be hurt by two large factors at play:

The larger question, though, is still whether or not Boise State deserves to play for the national championship. I say yes, qualified with a condition. IF they do not comprise a group of 3 or more undefeated FBS teams, with the other 2 or more coming from power conferences. I think the Broncos proved tonight that they are a tough, well-coached team who can go into a hostile environment and get a win - even under tough circumstances. If they run the table, they deserve the shot. However, they still play in an embarrassingly easy conference, and if there are undefeated teams from automatic qualifying conferences, the other teams should still get the nod.

What do you think? Chime in down below in the comments section! More analysis after the jump. 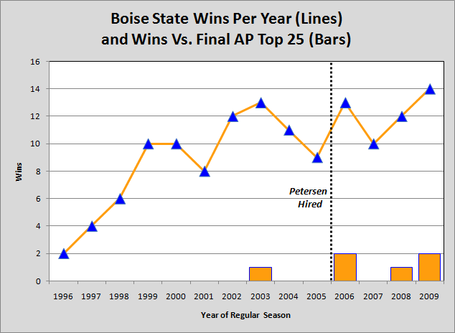 I just had to make this graph, because I think it perfectly illustrates the problem that most people have with Boise State. Since they've been promoted to the top division of college football in 1996, only 6 of their 134 victories have come against teams ranked in the final AP Top 25 Poll. That's only 4.48% of their games, a decidedly minuscule percentage. Even if you give them the benefit of the doubt, and only include 2006-2009 when Chris Petersen was their coach and they started scheduling a few more difficult non-conference games, and really rose to national prominence, the percentage of their wins against Top 25 teams is still only 10.2%.

In that same time span, for comparison, 19% of OU's victories were against Top 25 teams, 22.7% of Ohio State's were, and 27.1% of Florida's were. Also consider that all of these types of teams would have probably won more games if they had played in the WAC, and yet they were still able to put up similar win totals to Boise State.

Look, I'm still skeptical that Boise State could run the table in any of the automatic qualifying conference (yes, including the Big East) and I doubt they could run the table in the Mountain West Conference this year, either. However, I'll give them credit, they took the initiative this year and scheduled what was essentially a road game against a Top 10 team. They won this game with an impressive performance. If they're undefeated at the end of the season, and they did that, then sure, what the heck, I'll give them a shot at the crystal ball.

For those of you who don't like the BCS, you're going to have to root against Boise State. Imagine for a second that Boise State got admitted to the BCS Title Game, and won it. That will show that teams from non-AQ conferences can compete for the title, and will likely only act to entrench the current system.

What do you think?