Share All sharing options for: College Football Roundup: Week One

College football has arrived, and week one provided us with plenty of story lines. There were some close calls, and some blowouts, but most of the top teams that were supposed to win advanced to the 1-0 mark to start the season. One team that was supposed to win, and didn't, was Mississippi, who was hosting the FCS team Jacksonville State in Oxford on Saturday. Mississippi was sitting on a 31-13 lead at the start of the 4th quarter and wound up being taken to overtime. A picture is worth a thousand words, so here is the highlight package from that game, an instant classic, and likely to be one of the top games of the year:

More recap after the jump, including the Top 25 breakdown, and analysis on this week's games. 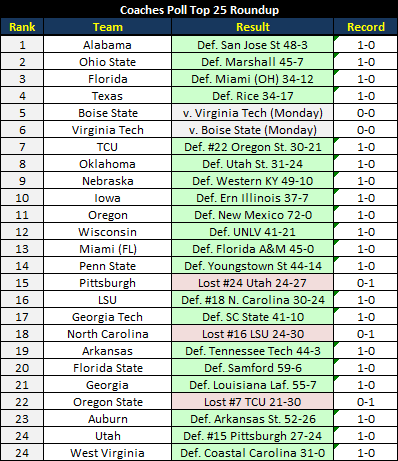 As you can see, no ranked team lost to an unranked team this weekend, and that will be assured to be the case with only the Boise State and Virginia Tech game remaining in Landover, Maryland on Monday Night. Since a lot of teams won, don't look for a whole lot of movement among the ranked teams. You might see some teams that didn't impress (*cough* OU *cough*) drop a couple places in the rankings, and some teams that impressed move up a couple spots. However, usually there's a lot of inertia in the pollsters to move teams around much - especially when they get the desired result - a win. This I think is especially true in the Coaches Poll, as coaches tend to be less reactionary than the media. The reason I used the Coaches Poll for the breakdown rather than the AP is that the Coaches is used in BCS calculations .

Teams With Work To Do
(I'll Leave OU Off As This Article Is About The Rest of the College Football World, But Clearly We Are One Of These)

And now, the Quick Slants:

Michigan began its "Road To Redemption" campaign in 2010 under Rich Rodriguez with a successful 30-10 victory over Connecticut. Call me skeptical, but I'd like to see them prove that against a more talented squad...I think that this may be the year that a non-BCS conference school gets the the National Championship. TCU and Boise State are both in the Top 10 and will have the ability to play their way in because of their position in the polls...Don't sleep on the Badgers. They are an experienced squad with a guy on the Heisman Watch (Clay) and their defense came to play against UNLV...The same goes for Arizona, who had a 41-2 thumping over Toledo...I don't care what you say, the Irish will always be overrated.

No Monday Night Football this week, with the NFL not starting until next weekend, but Boise State will take on Virginia Tech on Monday on ESPN at 7pm CDT. Would you consider rooting for the Broncos, ever? I know that a lot of OU fans still hold a grudge against Boise State, but you have to admit that they're enormously successful, they are there at the top of the rankings every year. I know that they run a lot of trick plays, but winning is winning (as we can be happy about after our game against Utah State).  There's a lot on the line on Monday Night. If Boise State can slip past Virginia Tech, there's literally nothing else standing in their way for another undefeated record other than a matchup with Oregon State in Week Three.

At 2:30pm CDT, Texas Tech hosts SMU. If you're interested in scouting out future opponents, here's your next chance.

The early games next week are pretty terrible, and OU plays Florida State in the afternoon slot, but here are some other games next week that should be pretty interesting: