Headlining what was not a terribly good day for the headliners in the Big 12 Conference, the Texas Longhorns continued their embarrassing play against the UCLA Bruins by losing in Austin 34-12.

"It was a rear-end kicking," Texas coach Mack Brown said. "This one's embarrassing for me. As a head coach, I'm responsible for everybody in this program, from the trainers to the managers to the walk-ons, to the kids to the coaches -- everybody."

This of course sets up a matchup between a very disappointed Longhorn team, and a slightly less disappointed Sooner team who narrowly beat Cincinnati 31-29, and constantly let the Bearcats back into the game. The third disappointing game was Nebraska, who only managed to sneak by FCS South Dakota State 17-3 at home in Lincoln. This game will probably get very little attention, but Bo Pelini was not happy either.

On the flip side of the coin, ranked Big 10 teams cruised by an average of 42.7 points, and that's including Penn State's 9-point home victory against the Temple Owls. Is the Big 10 the new Big 12 this year (aka the trendy "other conference" that gets paired as "elite" with the SEC)? 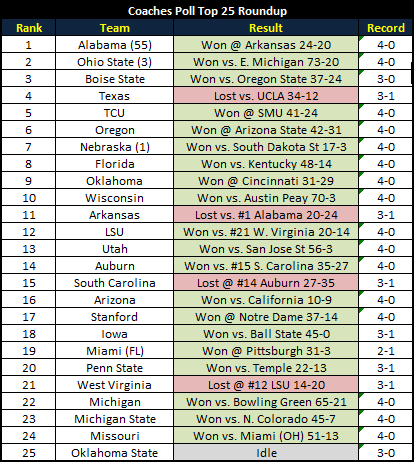 No undefeated teams remaining in the Big East, Conference USA, the Independents, the MAC, or the Sun Belt.

There will be 5 matchups between undefeated teams next week, several more pivotal games between ranked opponents, and even a few games that provide early jostling for position in conference battles. Listing all of those below would be extremely time consuming, so here are the prime cuts: