The story that everyone will be talking about: Michigan State up-ends Notre Dame in East Lansing, Michigan with a gutsy fake field goal call on 4th down in overtime, down 31-28. They wound up throwing for a touchdown and winning the game 34-31. You can see the look on Brian Kelly's face clearly said "Are you kidding me?!". Still, you have to tip your cap to Michigan State for a big play call that caught the Irish off guard.

The story that nobody will be talking about: One week after blowing out Colorado 52-7, the Cal Golden Bears dropped a little-publicized match against Nevada 52-31. They went from a +45 point margin to a -21 point margin, a 66 point swing! What gives? I would have never expected anything like that. Look for Cal to plummet well out of the polls. The upshot of this game is that it will give some people another glimmer of hope that Boise State may in fact have a loss by the end of the season. But, is Nevada actually that good? They do play the Broncos at home. 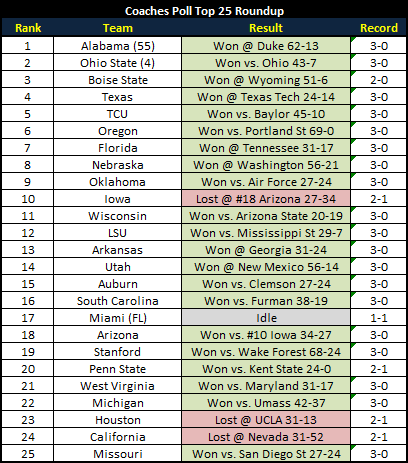 Are You Kidding Me?

Clear Your Calendars - Next Week's Big Matchups
This is a big week of games, and you should be able to watch some huge matchups from first kickoff on Saturday until well after sunset. This week we only had 1 game with two top 25 teams facing off, but this upcoming week it looks like it should be four. So, buy your snacks and prepare for a day of sitting on the couch and marveling at some wonderful college football games. Here you go: