This was definitely an interesting week in college football, with lots of upsets, and even some turmoil in the Top 25. In general, the top teams took care of business, with the highest 11 ranked squads (in the Coaches Poll) winning. Below that, half of the remaining teams in the Top 25 lost. We'll recap that a little later in the article.

The headline will be the continued success of FCS teams against their top tier brethren. Three FCS upsets occurred this week. The least notable was Gardner Webb knocking off Akron in overtime. Consider me unfazed. The other two were more interesting. South Dakota knocked off Minnesota in Minneapolis 41-38, and James Madison beat Virginia Tech 21-16 in Blacksburg, which was an upset in every sense of the word. This win by James Madison sent some ripples through the college football pond, as it will ultimately affect Boise State's strength of schedule. Clearly, Boise State's schedule would have looked much better if they had beaten a 1 or 2 loss Virginia Tech team, not one that lost to an FCS team.

There were several head injuries that resulted in the player being carted off, both from unintentional helmet-to-helmet contact. In the Wisconsin-San Jose State game, David Gilreath was taken off in an ambulance after he was hit fielding a punt. And, we're all familiar with the hit on Brennan Clay in the 4th quarter of OU's game that led to him being taken off in a gator cart. The news there was positive though, as apparently Clay is okay. Derrick Coleman, a UCLA running back, was also carted off at the Rose Bowl tonight with a similar injury.

Overall, it was a chaotic week in college football that wound up having some major implications for some teams, but most of the national title contenders rolled. More details after the jump. 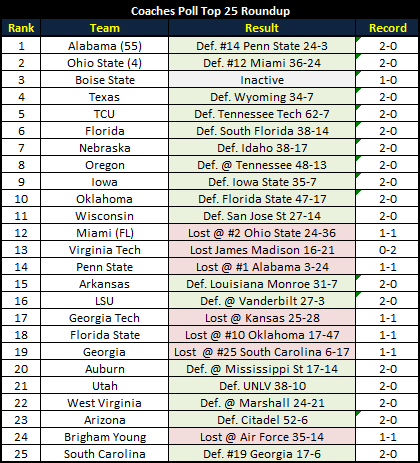 Obviously, Oklahoma impressed, but that will be covered in more detail over the coming days on this blog.

Utah State managed to knock off Idaho State at home 38-17. Don't let the final score fool you though, Utah State was up 38-3 before they let off the gas, put in the subs, and then surrendered 2 touchdowns in the last 3 minutes. They put up 542 yards of offense, and Diondre Borel was 21-26 for 255 yards and 1 TD. Perhaps the Aggies can make some noise in the WAC?

This slate of games makes me really wonder where the Gameday crew is going to wind up. Not a lot of high-flight games on the schedule. It would be cool to see them go to Arizona. I don't think they've ever been there.