Share All sharing options for: OU football picks up verbal commitment #13 & #14 (kind of) 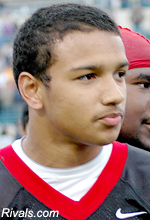 Check out the details after the jump.

Oklahoma football is in the middle of their summer camp this week, which has been attended by some of their top recruiting targets.  It's a natural time for OU to receive some early commitments as kids get a chance to work closely with the OU coaches and get a glimpse of everything OU has to offer.

Heading into the camp, Brandon Carter wasn't originally considered a player OU was believed to be strongly considering.  However, after an impressive performance in front of the OU coaches he received his official offer and verbally committed shortly there after.  Most believe that OU is recruiting Carter as a cornerback, although there is a possibility that he could wind up playing wide receiver.  OU has a need at CB, looking to take 3-4 in this year's class, and has been holding a spot for in-state stud Josh Turner (their #1 option, but reportedly a texass lean right now) and Klein Collins CB Charles Jackson (option 1a).  Carter obviously impressed Coach Martinez and the rest of the staff to warrant an offer and one that he was clearly happy to accept.

(My apologies for the lame video, but Rivals doesn't have any video up yet for Carter) 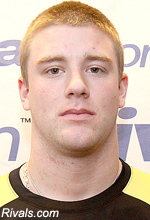 Okay, now the explanation behind the "kind of" part of the headline.  OU has also received a verbal commitment from Broken Arrow QB Archie Bradley.  The "kind of" comes into play because Bradley is also a very highly regarded pitching prospect (his commitment was made to both the baseball and football program) and there is some considerable speculation that he will be drafted by a MLB team and may never make it to Norman.  If Bradley does make it to Norman, he will reportedly receive a baseball scholarship and walk on to the football team.  OU wasn't expected to take a second QB with Sooner legacy Kendal Thompson already committed, so this could potentially be Bradley's negotiating leverage should he get selected in the MLB draft next year.  Goes without saying that the kid has an unbelievable arm and from most reports he has above average mechanics so it's not like he'd be a complete project as a QB recruit.  All that said, I'd be very surprised if he makes it to campus as it would be pretty hard to turn down the money he is likely to make if he's selected in the MLB draft anywhere near where he's being projected.

OU could potentially receive several more commitments over the next week or two, so keep checking back in with Crimson and Cream Machine to get the latest!

Welcome to Sooner Nation Brandon and Archie (at least for now)!