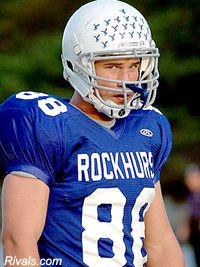 Apparently OU coaches aren't satisfied with just stealing the best kids out of the state of Kansas, now they've decided to start taking the top kids out of Missouri as well.  Tapko had long been believed to favor the Sooners, but was unsure at the time of his most recent official visit due to OU already having two tight ends committed.  However, things have changed since that visit namely the decommit of Chris Barnett.  Once that became official, it was simply a matter of time before OU TE coach and offensive coordinator Kevin Wilson was able to secure Tapko's verbal commitment.

Tapko plays both TE and DE currently, so there is some chance of him eventually winding up on the defensive side of the ball.  He's one of those kids who has a solid frame and could simply grow into a DE, much like current Sooner lineman Justin Chiasson who the coaches are moving inside to DT after he was originally recruited as a DE.  Most of the scouting reports I've read on Tapko compare his skill set favorably with former Sooner "jack of all trades" Brody Eldridge.  Tapko is an exceptional blocker for a high school TE and will only continue to improve on his technique and footwork once he arrives in Norman.  I don't know about you guys, but I'll take another Brody Eldridge type kid out on the edge blocking for our running game any day.