OU goes back into Kansas to get verbal commitment #16

Share All sharing options for: OU goes back into Kansas to get verbal commitment #16 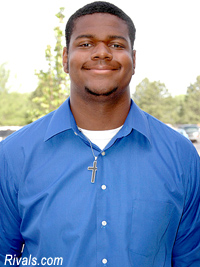 Check out the details and video after the jump.

"Phillips is a freak athlete" - Scout.com

I figured what better way to start this recap on the latest 2011 verbal commitment to the University of Oklahoma football program.  Given his size and the fact that the video you'll see below features Phillips, all 6'6" 290 lbs of him, at TE is a pretty accurate description in my humble opinion.  Can you even imagine being a high school DB and seeing a kid this size coming straight at you!

However, OU expect Phillips to shift over to the defensive side of the ball and are recruiting him at the DT spot.  There has even been mention, due to his incredible athleticism, of the possibility that he could eventually wind up back on the offensive side of the ball at the OT position.  Phillips is the first male athlete, in any sport, in the history of his high school to earn a division one scholarship.  The state of Kansas has been very good to OU in recent years and with the verbal of Phillips, it looks like the pipeline from KS to Norman isn't shutting down anytime soon.

Phillips had an opportunity to visit the campus recently at one of OU's summer camps and had an immediate connection with Sooner DT coach and invaluable recruiter Jackie Shipp.  Not only did Coach Shipp make an excellent impression on Jordan, he also impressed Phillips' mother as well.

"And Jackie Shipp is just wonderful. To be honest we were trying to give KU and KSU a last-ditch effort but probably not being fair to them because we didn't let them know it. He just felt like his connection with Jackie Shipp was too big to say he was going anywhere else."

"It was our first exposure to one of his offerings schools camps, so it left a very good impression. Maybe because it was first the other camps had a hard time impressing us as much. I had already been to a game with him and had already seen the stadium and the facilities but we didn't get to talk to a coach that weekend, because the class of 2010 was there for a lot of official visits," Kinder recalled.

"My husband has some friends from down there and it made the whole day special for them, they got to tag along and mingle with the coaches, it was really relaxed. The facilities are awesome.

"It was hard for us with the state schools because my husband and I are both from Kansas and I have parents that live in Oklahoma as well, I just think that I was a little bit starstruck meeting Bob (Stoops). Going into his office and seeing all the rings, watches, and the surf board. It makes you feel like there is something special." - Shelley Kinder (Jordan Phillips mother)

However, as Phillips describes below, it wasn't all bubble gum and lollipops from Coach Shipp during his time on campus.

Shipp, who has more than earned a reputation as a great recruiter, is often thought of as someone to 'butter up' a recruit but the exact opposite was what finalized Phillips' feeling on the Sooners.

"He worked hard with me, it made me respect him more and he just can get things out of me that no one else can if that makes sense," Phillips said. "I think he already knows what buttons to push to make me work harder. The other camps they were just happy I was there but he wanted me to get better."

I have to say I love when I hear about this kind of stuff for two reasons.  First, kids who pick up on this kind of thing and respond positively to it rather than having a spoiled little baby reaction are exactly the kind of kid I love at OU.  It's incredibly refreshing to hear a kid respect that kind of coaching rather than looking to be pampered and fawned over in order to secure their commitment.  Phillips continued on in the interview with a quote that perfectly describe why I see him as the type of player I described above and a quote I absolutely defy you not to respect.

On the field he'd like to continue the momentum of his camps at Oklahoma, Kansas, and Kansas State in which many feel he is moving towards a much loftier ranking than his current No. 132 spot in the Rivals250. However he may be looking for things to head into another direction.

"Honestly I'd rather be ranked lower so I have more motivation."

Jordan's mother, Shelley Kinder, provided another quote that pretty much summed up her son and what led him to his commitment to OU on Monday.

"Jordan is a winner and he wants to play with winners," Kinder said.

Enjoy the video below and do yourself a favor and keep a close eye when you get to the 1:06 mark for a little taste of what's to come when Jordan makes the transition to defense.  And as always, welcome to Sooner Nation Jordan!