Does The Big Twelve Add 2 Teams?

Share All sharing options for: Does The Big Twelve Add 2 Teams?

Dysfunctional or not, the Big 12 is staying as one big family, except for Nebraska and Colorado who bolted for seemingly greener pastures. This was quite the soap opera for the past week, and it feels good to finally have it resolved. Like any family battle, it left us with some good things and some bad things. For instance, you have to be happy that we are planted in a conference that is in our region, and that we won't rack up huge travel bills. We have preserved a lot of traditional rivalries, and a lot of teams that don't carry a huge stick will get to stay in a BCS Conference and play with teams they are familiar with. The power brokers - Oklahoma and Texas in football, and Kansas in basketball, are still in place and will ensure that our conference gets at least some measure of respect.

But there are definitely some negatives that have emerged from this whole process. The one I have the biggest problem with is that we publicly admitted that we were Texas' little brother, and that we would follow them whereever they go. I appreciate their efforts to preserve the Red River Rivalry, but in no way do we need to publicly admit that we are the #2 team. Another negative is that we just rid ourselves of two solid schools, something that will definitely act as a detriment to the conference's prestige. Certainly, Colorado and Nebraska have not been "superpowers" lately, but they carry with them a long history and solid academics. You can't argue that Nebraska hasn't had above average teams recently, and it seems that Bo Pelini has that team on the right track.

With the cavity that is left by the departure of said teams, the question becomes does the Big 12 add two more teams, or do we simply swap names with the Big 10?

The television contract that was negotiated appears to be for a 10 team conference, which leaves me a little skeptical that Dan Beebe will try to add any teams. Money off TV revenue was his big selling point for keeping the conference together, and adding two more teams in the mix would probably mean a lower bottom line for most teams in the Big 12.

The problem is that in college sports - a lot is subjective, and a lot depends on what people think about your conference. Why do you think that Boise State has never played for a national title? The perception is that they play in a weak conference and they didn't "earn" their undefeated record. Nebraska and Colorado may have been down in the past decade, but they also formed a key part of the Big 12 core. The flip side of the coin is that the Pac 10, Big 10, and Mountain West seem to be taking aggressive steps to move their conferences forward into a more modern and equitable setup for college sports, and also to add stronger teams to their ranks.

This is not addition by subtraction. We are perceived by the rest of the country as having done nothing except reacting too late and letting two of our core members walk away. We will be seen as a conference that is moving towards a traditional power structure - no conference championship game, and a couple of powerhouse teams that can afford to relax on the last week of the season.

For all of those reasons, I think that Dan Beebe needs to do something productive, earn his paycheck, and add a couple of solid teams to the ranks of the Big 12. He apparently has a lucrative TV deal in hand, or he wouldn't have convinced all these teams to stay. Therefore, he should be able to manuever to pick off two more teams. Let's operate under the assumption that he does, who should the Big 12 add? Let's look at some candidates that have been rumored:

For BYU football, the past 33 years have been packed full of championships, bowl games and national honors. Since 1974 BYU has played in 26 bowl games, won a National Championship, claimed 22 Conference Championships and earned 16 national top-25 finishes, including four top-10 finishes. In 2008, BYU will enter the season with the nation's longest active winning streak at 10 straight games, including a victory over UCLA in the Las Vegas Bowl. Over the past two seasons, BYU has posted a record of 22-4 and has won 22 of the last 25 games it has played.

We all know what BYU can do on the football field, as we saw last year. They have had 63 All Americans and have a solid football tradition. They have an active and loyal fan base, and have been very good recently, winning more than 7 out of every 10 games under coach Bronco Mendenhall. But, they are also solid in other athletic areas. They are in the Top 25 all time in college basketball victories, having been to the NCAA Tournament 21 times and winning NIT Championships twice. They have a solid volleyball tradition (which would help replace the departure of Nebraska). In men's volleyball, they won the NCAA Championship 3 times (1999, 2001, and 2004). And they are usually ranked in women's volleyball. Their women's soccer team has made the tournament 9 times, reaching the Elite Eight in 2003. The Cougars would be my top choice to add to the Big 12 North. 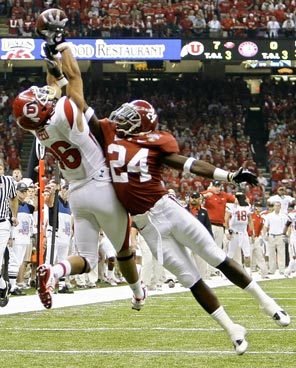 If you want history, Utah's football team has been competing since 1892.

In addition to all of that, they have a history in basketball as well, with the 9th most wins among any men's basketball program. From Wikipedia:

The Utes have made 29 NCAA Tournament appearances, which ranks 7th all-time, while the Utes 10 outright conference championships (28 championships overall) is the 5th best in NCAA history.

The Utes have played in four Final Fours, winning the 1944 NCAA Men's Division I Basketball Championship.

They have played for the championship as recently as 1998, when they lost to Kentucky. They are no slouch in women's basketball, and their current coach has been there 26 years - with the Utes qualifying for the tournament 15 times and having a cumulative 0.717 winning percentage over that stretch.

I would also love to invite Utah, which would have the added benefit of keeping the Utah-BYU rivalry in the same conference. I'm sure Utah and BYU would spring at this opportunity to play in a BCS conference and finally have a chance to legitimately lay claim to the whole enchilada.

Could they be pried from the SEC? That is the big question. I'm sure the SEC could find another team that would finish in the middle of the pack in football, and perhaps shore up their basketball ranks - a team like Memphis, or Louisville. Arkansas is a traditional rival of Texas, and even of Texas A&M. They are on the fringes of SEC territory geographically, and originally were a part of the Southwest Conference - territory that is now covered by the Big 12 conference.

If Arkansas was presented with the choice to compete for titles in the Big 12 North Division (which they could do pretty easily as they are right now), or continue to be an average SEC team, I'm sure they would jump at the chance to move to the Big 12. Does Beebe have the guts to pull the trigger on this though? Probably not.

According to CBS Sports.com, FedEx CEO Fred Smith -- whose son Cannon is a quarterback at the school -- has made it it known to various conferences that his company would be willing to ship up to $10 million annually to their athletic coffers if they were to add Memphis to their BcS clique.
Seriously, that's the report.
"It could be $10 million every year for a conference to use however it sees fit," said one of the sources, who spoke on the condition of anonymity. "When you think of the big picture, it could be the equivalent of a five-year, $50 million contract or a 10-year, $100-million contract. Fred is talking about a massive amount of money. ...
"The money that used to go to the Orange Bowl is now set to go to a league that will invite Memphis. Fred has made it clear he'll put that money back into the budget for the right league. He's driving this thing."

Well, Beebe has proven that he's motivated by money, so this could be a viable option, but Memphis doesn't really bring a whole lot to the table in football. I would prefer other teams, but this would certainly add a boost if the concern was having to divide up TV revenue amongst another member.
Texas Christian (TCU)
TCU does have history and tradition in football, and have the benefit of being old Southwest Conference rivals as well. They lay claim to 2 national titles, and have been 85-28 under head coach Gary Patterson. The Horned Frogs wouldn't really expand the conference's footprint into other television markets, something that could wind up being a major negative factor if the Big 12 did decide to invite teams.
Houston
Again, there is not much incentive television-market-wise to add Houston, but their name has been thrown out there as an expansion possibility. They do not have as much of a history either, and I think it's doubtful that the Big 12 would even consider them.
Notre Dame
Would the Irish actually peel away from their cozy setup with NBC and the BCS? Perhaps, but I think it would take a playoff system to cause that. Unless the push for a playoff system is strong in the next several years, I don't see this happening. Even then, I see the Irish wanting to move to the Big 10 as they have more traditional rivals and games scheduled against those teams anyways.
Are there any teams that I've missed? Which of these options do you like the best? Do you think we'll actually expand the conference now? Let your thoughts be heard in the comments section!