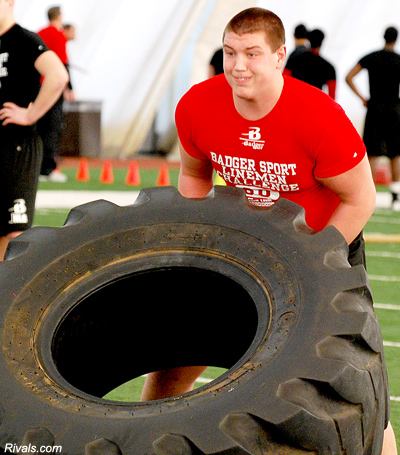 Check out the details and video after the jump.

In the span of less than 48 hours, Oklahoma was received verbal commitments from two massive offensive lineman.  Allow me to reiterate the term "massive" when describing recent commit Derek Farniok, dude is 6'9", 300+!  Farniok showed significant improvement earlier this week at the OU summer camp.  He attended an OU camp last year and came away with mixed results, but he seems to have made big strides with regards to his footwork and coordination.  The scary part is this kid is still learning how to use his size effectively, so you can only imagine the potential he possesses.  Clearly he impressed o-line coach James Patton and the rest of the OU staff seeing as he did not have an offer heading into the camp.  He and his family were very excited about the commitment and the opportunities he will have once he arrives in Norman.