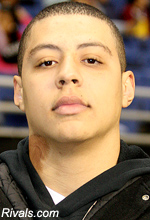 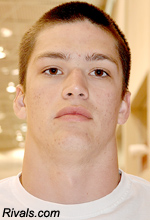 Check out more after the jump

If you frequent any of the recruiting websites, the commitment of Klein Oak teammates Nathan Hughes and Max Stevenson to OU on Saturday night likely didn't come as much of a surprise.  There had been rumors leading up to their announcement that both were seriously leaning towards OU after recently attending the OU spring game.  The two teammates are very good friends and had entertained the idea of playing together in college, but until recently Stevenson had not been receiving offers from programs of a caliber similar to OU.  That all changed after the two attended the spring game ($):

According to both players it was their time in Norman for Oklahoma's spring game that solidified that not only did they want to play together but wanted to do so in Norman.

"To be honest, talking about playing together started happening when we were there," Stevenson recalled. "Before they offered me we were sitting in the stands and Nathan was saying 'It would be so crazy if you were offered here. He was saying it would be great if we could come here and we could play together'.

"I mean for a while he had all these offers so we didn't think we'd be able to but as soon as the process was really going for me and I started to get these bigger offers it was instant that we wanted to play together."

Stevenson is a 6'6" 227 pound TE who has been gaining more and more attention in recent weeks.  He had offers from schools like Arizona, LSU, Notre Dame, and Texas A&M among others.  Given all the drama surrounding current TE commit Chris Barnett, Stevenson could soon become OU's only TE commitment for 2011.  Stevenson typically lines up flexed out in his high school offense, so he probably won't be the most accomplished blocker.  He's a big strong kid who will only get stronger as he continues to add weight during his upcoming senior season and especially once Schmitty gets him on campus.  He's very athletic and fluid for a kid his size and is not one to shy away from contact.

Any OU football fan that follows recruiting is well aware of the fact that the OU coaching staff has always struggled to recruit the city of Houston.  They have routinely missed out on Houston area recruits no matter the coach doing the recruiting.  However with the commitments of Hughes and Stevenson, in addition to recent commit Brandon Williams, there are very positive signs that the OU coaches are finally making some inroads with the Houston area recruits.  Houston is one of the largest cities in Texas, so if OU was able to start consistently pulling kids out of an area they were previously never successful it could be an enormous boost to their recruiting.  Interestingly enough, Hughes addressed the Sooners problems recruiting the Houston area in an interview shortly after his commitment.

"I think that's a big deal, Texas people think UT is representing the state of Texas. People want to be at that school," Hughes explained. "That's just how I was raised because that's how biased things were against Oklahoma. Nobody wants to be that guy that says they like OU just because everybody else likes UT. For anybody that goes to see OU they are going to change their mind, Norman is the place that has that feeling. It felt good there for me and Max.""I would have fallen victim for that. I'm not giving anyone a hard time, I would have done the same thing if Texas would have offered me early, just jumped on it before I looked around at all. "To be honest with everything that happened I would have committed to Texas the day they would have offered me on their junior day. And on another note I'm so happy they did not offer me. I was just blinded by the fact, I never really looked at everything about the school. I'm not going to dog on Texas but I never really gave another school a chance to win me over. I'm just happy that things turned out the way they did."

And make no doubt about it, both players won't be worrying about what else may be out there to see."I'm totally committed to Oklahoma, I'm not going to visit any other schools. I can't wait to go to OU, play for OU and wear Crimson. We're totally committed to Oklahoma and make an impact on the team as soon as we can," he said. "There were people around here saying that if Cedric Reed went to Texas A&M and Texas offered me that I would have gone to Texas."There was no way that was happening I've known I was going to Oklahoma for a bit now."

Hughes is a 6'6" 263 pound DE who has a knack for making plays behind the line of scrimmage.  He's not your prototypical high school DE who just explodes off the ball trying to sack the QB and losing sight of the ball.  He actually plays the run extremely well and makes plays all along the line of scrimmage.

So not only did OU get good news in the commitment of the two teammates, they appear have made significant progress in recruiting the Houston area for this first time in Stoops tenure.  Hopefully Hughes, Stevenson, and Williams are the first of many Houston kids who will be making their way to Norman.