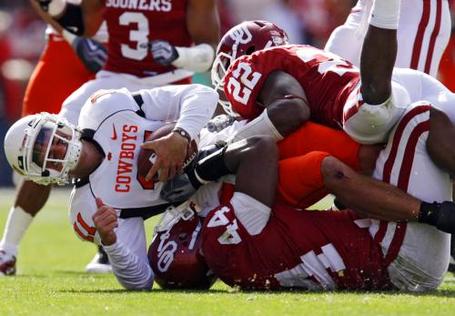 Considering the guys will resume practice on Monday, I thought now would be as good a time as any to resume our preview of spring ball.  Not to mention we could use any distraction to avoid the whole Tiny Gallon debacle.  So, the DL lost one of the great Sooners of all time in Gerald McCoy and it goes without saying that there won't be anyone who is capable of replacing him in 2010.  That said, OU has several talented guys at DT that will collectively attempt to replace the production lost with McCoy moving on to playing on Sundays.  As we'll see at both the DE and DT spots, there is plenty of talent behind the starters but not much experience.  So avoiding injuries is going to be very important for the DL in 2010.  Let's take a look.

Beal had arguably the best season of any OU DL last year.  There were several times where he was just unblockable and became the focus of the opposing team's blocking scheme.  In fact he had such a good season, there was considerable speculation that he may have left early to pursue a career in the NFL.  Fortunately for us, he chose to come back for his senior year and I'm sure I'm not alone in my excitement for what his upcoming senior season has in store.  Check out the video below which has a couple highlights from Beal's breakout game against Missouri in 2007.  Granted there are only a few, but then again do you really need a reason to relive that beatdown.

Frank Alexander is a little bit more complicated to analyze than his counterpart above.  Alexander is one of those players who has an absolutely incredible amount of athletic ability, but can frustrate he heck out of you because it seems to only come in flashes.  On a straight talent basis, I think you could argue that he is the most talented of the DEs on OU's entire roster.  2010 will be a significant season in his development into a player that shows the potential to become the dominant pass rusher the coaches believe he has the ability to become.  If he is able to be a more consistent player, he could be a vital part to the success of the OU defense.  This defense is built on getting to the QB and funneling the ball carrier to the LBs.  So, pressure from the outside is essential to the success of Venables's system.

Both King and Washington saw very limited action last year, so I would expect Beal and Alexander to remain on the field for a majority of most games.  However, with the inevitable departure of Beal at the end of the year and the possibility (albeit remote) of Alexander leaving were he to have a monster year it is vital that both King and Washington can develop into players the coaches know they can rely on.  King has proven that he can be that kind of player, but Washington has yet to even really come close to doing the same.  R.J. came in with a huge amount of hype and has drawn the ire of the coaching staff throughout his time in Norman.  The most recent example being his lack of inclusion in the pre-spring two deep.  This spring/summer will be crucial in Washington's chances of securing a spot in the DE rotation.  If he continues to frustrate the coaches, he could quickly fall into the "bust" category that so many unmotivated five star recruits fall prey to.  I'm optimistic that the light finally comes on upstairs for him and he starts to realize his potential.  I think a big part of his problem thus far is the kid is just a pure pass rusher and OU requires their DEs to do a lot more than simply go get the QB.  As we'll discuss, OU has several kids coming in that will be extremely motivated to show they are capable of playing in 2010.

The first video are some David King highlights from a couple years ago which should give you an idea of what we hope to expect from him this year.  The second is a short video displaying Washington's abilities as a pure pass rusher.

I absolutely LOVE this Grissom kid!  I think he is going to be a beast and projects to be the next dominant OU DE.  He was a late addition to the 2010 recruiting class and had been a KU commit for quite awhile.  However, with the firing of Mangino the OU coaches used that opening to go in and secure the commitment from one of the top defensive players in the state of KS.  He comes from an incredibly successful high school program, so he'll fit right in at OU with our winning tradition.  Ndulue is a kid the coaches were in on well before practically anyone else and it paid off when he chose to sign with the Sooners.  I heard a radio interview with him on signing day and he was one of the most well spoken kids I had ever heard on the radio.  I fully expect him to redshirt in 2010, but he is a very athletic kid for his size and I definitely don't think he's done growing.  I could see him being a kid that continues to add size, similar to Justin Chiasson, and eventually move inside to DT.  Unfortunately, I couldn't find any film online of Ndulue but watching some Rivals video of him showed his ability to get up field in a hurry.  Trust me when I tell you this kid has a very impressive burst off the line.

Check out some highlights from Mr. Grissom

I don't think either of these guys needs much of an introduction to most OU fans and for two very different reasons.  Taylor is sadly best known for the gruesome injury he suffered against Stanford in the Sun Bowl last year.  I wouldn't even think of dishonoring him by posting video of the injury, so if for some reason you haven't already seen it believe me when I tell you that you're very lucky to have missed it.  The great news is that the coaches have said that Taylor is on schedule to return to practice this summer, which given the severity of his injury is a very, very good sign.  There's no doubt he benefitted from playing next to McCoy last year, but that shouldn't take away from he season he had in 2009.  I can virtually guarantee that I'm not alone in wishing him a 100% recovery and am absolutely looking forward to him lining up at DT against Utah State.  I'd be surprised if you watch the video below and don't come away thinking the same thing I did.  This is just a really good kid who deserves a chance for a healthy senior year

Oklahoma DT Adrian Taylor is Funny Too (via jwise1950)

McFarland on the other hand is known to Sooners fans as the one who "got away" from the hated Longhorns.  McFarland was the subject of one of the more highly publicized recruiting battles in recent years and one that many TX fans have apparently yet to get over (expect comments from any lurking to immediately discredit my claim).  I'm sure everyone is familiar with the NY Times article documenting his recruitment that lead to all the controversy (if not click here) so I won't rehash the past.  I'm simply address the fact that the real reason McFarland eventually chose OU was because of Jackie Shipp and the OU tradition at DT.  McFarland projects to be the next dominant DT for OU and when given the chance in 2009, he showed no reason to doubt he is ready to step into that role.  He played a prominent role in the Sun Bowl after Taylor went down with his ankle injury and gave us all a preview of what to expect in 2010.  I'm sure I'm not alone when I say I think he's going to have a little something to say about the game in Dallas this year.

Highlights of DT Jamarcus McFarland, #55 on Takkle's Top 200 (via takklesquad)

To the best of my knowledge, McGee has yet to step on the field as a Sooner and if Walker has played at all it has been extremely limited.  So much like the DE spot, there is very little if any game experience at the backup DT spots.  That's certainly not to say they are not capable, I mean McGee was athletic enough last year to move over to the OL during preparation for the Sun Bowl thanks to the countless injuries the OL suffered in 2009.

If that list and the fact that they are all freshman doesn't impress you then I don't know what to think.  Clearly the coaches have made a concerted effort to bring in a ton of talent at the DT position.  Granted Chiasson was originally recruited as a DE and just simply grew into a DT, but the four listed below him are all true freshman in the class of 2010.  Given the lack of experience at the backup spots detailed above, there is plenty of reason to think that at least one of these kids could see the field in 2010.  The most likely guy is Chiasson just from the experience he gained redshirting last season, but don't sleep on Humphrey.  It goes without saying that if Chiasson wants to be on the field he will have to continue to show the coaches he can stay out of trouble.  He had a well documented legal issue (save it TX fan) before arriving in Norman, but had no issues last year and by all accounts is a very humble kid who has matured and learned from his mistake.

As always, feel free to address anything I may have missed in the comments below.  The DL has been a significant part of the success of OU defenses in the past couple years and while there has been a considerable loss of talent, there is no reason to think this DL cannot carry on that tradition.