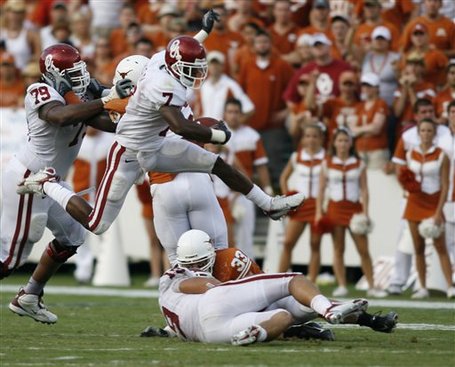 Originally, I would have preferred to wait a couple days in between posts.  However, with spring practice due to start next week I thought I try and get another one up while I had the time.  Another reason for the short wait is the excitement about the two incoming freshman OU was able to sign in the 2010 class.  Unfortunately, neither will be on campus for spring practice, but that won't necessarily rule them out for seeing the field this coming season.  So check out the breakdown after the jump.

Coach Gundy and the rest of the offensive coaching staff have done an excellent job recruiting the RB position over the last couple years and as you are probably aware, this year was no exception.  With the graduation of Chris Brown, DeMarco Murray's decision to return for his senior year was clearly motivated by the opportunity to be the primary ball carrier in 2010.  Stoops and Gundy have traditionally used a minimum of two RBs (if not more) throughout the season, so while DeMarco is sure to get the lion's share of the carries there is a significant chance we will see some of the younger kids get some chances this year.  If for no other reason than to get them ready for next year when Murray wlll move on to playing on Sundays.

Well, I had to include this video just for one highlight.  Do yourself a favor and go to the 3:25 mark to relive the greatest run of DeMarco's career.

Oklahoma Vs. Texas 2007 (via mrjeffmaxwell)

You could argue that since AD left, no one has given us more exciting game breaking plays than DeMarco.  You could also argue that ever since the injury he suffered at the end of the Tech game a couple years back that he's never looked as explosive as he once did.  I think part of that is his running style, meaning he's more of a glider, so it has a tendency to look like he's not moving as fast.  Despite the chance that he has lost the slightest of steps, he is still a home run threat every time he touches the ball.  For that reason alone, expect Coach Gundy to utilize him in the passing game even more than he did in 2009.  In his last year on campus, DeMarco is sure to demand the ball as much as he can get it to both help the team and increase his draft potential.  He figures to take it pretty easy this spring given his injury history, which leads perfectly into our next player analysis.

There are a couple positions headed into the spring where a handful of players have a lot to prove.  At first thought, backup running back may not seem like a very important position but as discussed above DeMarco's history of injuries makes it a very important position.  That's why Calhoun is one of a handful of players with the most to gain by having a productive spring practice.  Barring injury, he's virtually guaranteed to get a majority of the spring snaps with the first team offense.  So he'll have no one to blame but himself if he doesn't come out of spring practice as the solid backup to Murray.  If he does not have the strong spring he's expected to have, his playing time could be in serious jeopardy with the fall arrival of heralded recruits Brennan Clay and Roy Finch.  Calhoun could also be pushed for playing time in the fall if Jonathan Miller is ready to return to the field after season ending knee surgery.  Both Calhoun and Miller showed glimpses of their ability during mop up duty late in games during 2009, but Calhoun also showed a propensity for not holding on to the ball despite his limited playing time.  That is something he'll have to work on this spring as we all know fumbling is one of the quickest ways to get in Stoops's doghouse.  Calhoun came in two years ago with a lot of hype and while it's way too early to call him a disappointment, this spring is a pivotal point in his career to show that he's more than just hype.  Not a lot of video of Jermie in an OU jersey, so here's some high school highlights.

Both Clay and Finch come in with big expectations and could legitimately make a push to see the field in 2010.  Ironically, Clay probably compares favorably to Murray in the aspect that both are very capable catching the ball out of the backfield.  Murray has developed into a much more powerful back during his years on campus, so there's no reason to think Clay cannot do the same over time.  Two years ago Clay was the first San Diego player to ever record 1,000 yard rushing and receiving in the season.  As an encore to that, he simply put up 2,000+ yards rushing and 26 TDs in his senior season.  The most natural comparison for Finch is former Sooner standout Quentin Griffin.  If that's the standard, then Finch has a lot to live up to and I wouldn't simply compare the two simply due to their similar stature.  Griffin was probably a more powerful back, while Finch is appears on film to be a more explosive back.

If I had money on it, my bet would be that Clay has the better chance of the two to see the field in 2010.  Call it a hunch, but I think the coaches will have a hard time keeping him on the sidelines.  That's not to say that Finch is a slouch by any means, but given his size I'm guessing they'll try to beef him up a little bit and give him the year to learn the offense.  The first video is a very impressive highlight reel for Clay.  The second video is a short clip from one of Finch's high school games this past year.  For some reason I had a little trouble finding more highlights for him on YouTube, but believe me when I tell you the ones I've seen on other sites have been very impressive.  The third video is just a video I found that I thought was kind of funny so I threw it in there for everyone else to enjoy.

Choctaw at Niceville - September 11, 2009 (via shalimarjags)

All Big 12 FB Matt Clapp has graduated which leaves LB convert Brandon Crow (SR) and Marshall Musil (RS FR) to fill his spot.  Clapp was used in several different situations and was more versatile than a typical fullback.  Don't expect Crow to play that same role as he'll likely be seen mostly in goal line packages.  Musil has the athletic ability to be a little more versatile, but isn't quite as big as Clapp or Crow.  In addition, incoming freshman Trey Millard could also factor into the rotation as more of a H-back.  He played a lot of RB in high school and is an excellent athlete who could be compared to a more athletic Brody Eldridge (potentially).

So as you can see, OU is absolutely stacked at RB for many years to come.  Plenty of reason to be excited for Calhoun, Miller, Clay, and Finch to take the torch from DeMarco after this year and carry on the tradition of stud OU RBs.  Let me know if you guys are as excited as I am to see what these kids are capable of this year.