Anyone who knows anything about college football knows that the UConn Huskies can run the football. They've got the nation's 5th leading rusher in Jordan Todman and were second in the Big East Conference on the ground. The question for the Huskies is can they throw the football? Even better, can they beat the Sooners without throwing the football?

Connecticut ranks 112th out of 120 FBS schools in passing offense (averaging 145 yards per game) and , no, they can't beat the Sooners without successfully putting the ball in the air. UConn knows that, Oklahoma knows that and both teams are game planning around it.

Everything starts upfront for both teams. The Huskies want to open running lanes to try and spring Todman into the second level of the Sooner defense. To prevent that, Oklahoma is most likely going to have their defensive line pinch in an effort to try and plug the gaps. What that means is that Oklahoma's defensive linemen are going to drive the gap to their inside to try and gain penetration across the line of scrimmage. OU may do this with all four defensive linemen in a short-yardage situation or just with the tackles in other situations. 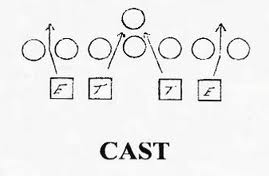 In the image above the defensive tackles are pinching and the ends are playing containment to prevent a play from bouncing to the outside. This leaves only the "B" gaps available for a runner to go through if done successfully by the defensive line. The result is an easier assignment for the linebackers. When they see the tight ends blocking down they know to fill the "B" gap on their side. If the tight ends release then they can drop in zone coverage or play man-to-man.

Obviously a successful passing game makes it more difficult to sellout to stop the run and there's the rub. UConn will no doubt try to air it out in an effort to loosen things up for Todman. If Demontre Hurst and Jamell Fleming are able to man up on Smith and Moore and Oklahoma's defensive ends are able to pressure Zach Frazer then its going to be a difficult night for the Connecticut offense.

Frazier is only completing 53% of his passes and has just one more touchdown than interceptions (5 to4) which means initially they'll probably try to throw on second and third and long situations. This brings up another defensive option we'll see from Oklahoma as well. Tony Jefferson or Joseph Iibiloye will come in as the nickel back to provide both run and pass support. Brent Venables will use them for both run and pass blitzing as well as an additional linebacker and a defensive back to drop back in coverage.

I'm sure there's more wrinkles that Venables will bring with his defense but the key for Oklahoma is to take the run away and try to force Connecticut to beat them through the air. Oklahoma's defense has a tremendous success rate against one dimensional offenses and the Huskies certainly meet that description.