The good news for the Tulsa Golden Hurricane is that they get to spend Christmas in Hawaii. The bad news is that they have to play the Warriors in the Hawaii Bowl tonight. There's nothing like traveling to the middle of the Pacific Ocean to play a host team in their bowl game on their island.

Tulsa has an offense to match Hawaii's but a defense that's more so in name only. When it actually comes to stopping opponents from scoring they're not really that productive. The Golden Hurricane allowed an average of 30 points per game this season and Hawaii is scoring an average of 40. I'm just thinking that's a bad formula for Tulsa tonight. 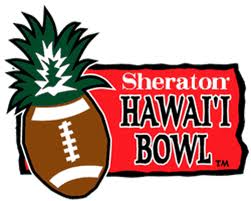