Since I last did a roundup in Week Five, 13 teams have been eliminated from the ranks of the unbeaten, including the previously unbeaten Michigan State Spartans.

This past week, two undefeated teams were not only knocked off, but were soundly beaten in almost all phases of the games. Roy Helu Jr. racked up 307 yards rushing for the Cornhuskers, and Iowa demolished Michigan State by more than 30 points.

As the unbeaten teams have been whittled down to five, it is looking increasingly possible that Boise State, TCU, or Utah may wind up in the national championship game. And therefore, we can also expect the debate to heat up over the college football postseason, and the way the sport decides its national champion. 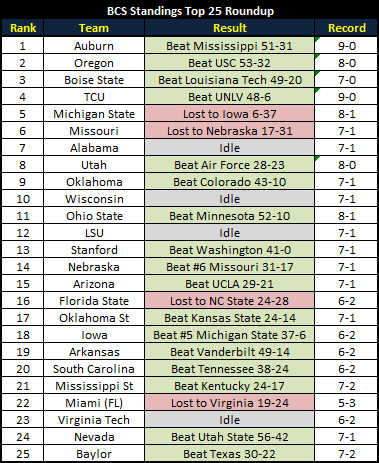 Total number of undefeated teams is 5 (4.1% of FBS). 2 teams were eliminated from the ranks of the unbeaten this week.

No undefeated teams remaining in the ACC, Big 12, Big 10, Big East, Conference USA, the Independents, the MAC, or the Sun Belt.

Besides the OU game, which is always the most important game to tune into of course, here are some other good college football matchups to whet your appetite: