A Little About The Idaho State Bengals

Share All sharing options for: A Little About The Idaho State Bengals

It's a little difficult to preview a team that you know absolutely nothing about, but we're going to give it a shot. It will be a learning experience for everyone!

Let's start with a little about the university. It is located in Pocatello, Idaho, which is a city in southeast Idaho that has a population of around 54,000 people. That figure makes it the fourth largest city in the state. For those of you who loved to play the game Oregon Trail on the computer, the university is located pretty close to the actual Oregon Trail.

The university was founded in 1901 and received university status in 1963. The enrollment in the university is just shy of 14,000 students. The football team competes in the Big Sky Conference (FCS) and plays its home games in Holt Arena, which is the oldest enclosed stadium on a college campus - completed in 1988. They won an NCAA Division I-AA Championship in 1981. Notable football alumni include Minnesota Vikings defensive end Jared Allen and current ESPN commentator Merril Hoge.

The team is coached by John Zamberlin, who now has a combined record of 4-20 over the previous two seasons and the first game of this season (ISU lost to Arizona State this year). Have you ever wondered what happens to position coaches on atrocious NFL teams? They wind up at places like Idaho State. Defensive Line coach Joe Cullen was on the Detroit Lions staff for the past three seasons. Cullen actually made headlines while at Detroit. Idaho State was picked to finish last again in preseason coaches polls in the Big Sky Conference.

More about the actual football team, after the jump!

Idaho State returns only 12 of 22 starters from last season - 8 on offense and 4 on defense. Last year, their defense was the weak spot as they gave up an average of 41.2 points per game (117 out of 118 FCS teams), and 480 yards per game (118 out of 118 FCS teams). They held only two teams, Northern Colorado and Montana, to under 30 points. They managed to hold Arizona State to 407 yards of offense and only 5.9 yards per play, which are better than their averages from last year, but lost the game 50-3. 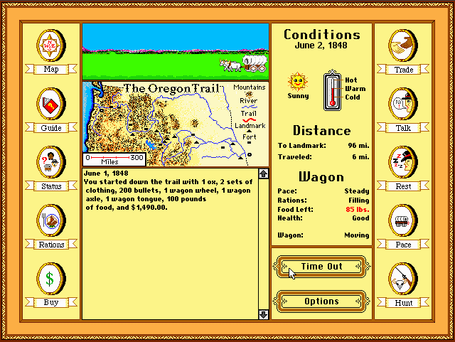 Everyone loves Oregon Trail! And the real Oregon Trail is really close to the Idaho State campus!

It probably would have been more lopsided had the Sun Devils not had to kick five field goals against Idaho State, all within the 30 yard line. Had all of those drives ended in touchdowns, it would have been 70-3. Arizona State also missed another field goal. Therefore, I'm sure the Idaho State defense took some positives out of that game. Additionally, the 37 yards of offense for the Bengals in that game is somewhat misleading since they had a 32 yard loss on the final play.

Junior Russell Hill is the starter at quarterback for Idaho State. In 2008 he completed 61.7% of his passes (251-407) for 2626 yards. He did throw 14 touchdowns, but also threw 15 interceptions and was sacked 17 times. He only managed 32 yards against Arizona State, throwing a pick and being sacked once. Junior Kyle Blum relieved Hill at times in the Arizona State game. He was only 3 for 10 for 10 yards, throwing 3 interceptions and being sacked once. His passer rating was -21.60, and I wasn't aware you could receive a negative rating.

Look for them to try to run the ball behind an offensive line that returns four starters. Clint Knickrehm (Senior) will probably get the bulk of the carries. In 2008 he rushed 123 times for 456 yards - an average of 3.7 yards per carry. He also caught 16 passes for 143 yards, an average of 8.9 yards per reception. Against Arizona State, he got 15 carries for 24 yards and caught 3 passes for 12 yards. Essentially, he accounted for most of the positive yardage the team accrued.

Their longest play from scrimmage was a 22 yard completion to wide receiver Jaron Taylor (Senior). Arizona State didn't get many big plays either, so I'm guessing that Idaho State will play deep zone coverage, give up a lot of the underneath stuff, and try to limit the damage. I hope that's what they do, because it would allow Landry Jones to settle in and complete some dink and dunk stuff to open the game.

Arizona State could have possibly put up 60-80 points on Idaho State, but had a lot of drives stall in field goal range - right around the red zone. Hopefully we can put up points a little more aggressively, since Arizona State was only up 20-0 at halftime. That's a score that most people would be happy with against most opponents. However, I'm sure a score like that at halftime would be alarming to most Sooner fans in a situation like this.