Sam Bradford’s injury certainly looked like it could have been much worse but it was bad enough. The Sooners sputtered on offense without their Heisman quarterback and now face an uncertain future in his absence. 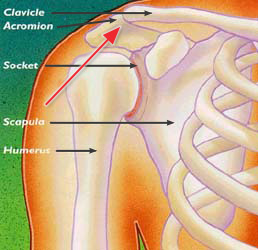 A shoulder separation is not truly an injury to the shoulder joint. The injury actually involves the acromioclavicular joint (also called the AC joint). The AC joint is where the collarbone (clavicle) meets the highest point of the shoulder blade (acromion).

The most common cause for a separation of the AC joint is from a fall directly onto the shoulder. The fall injures the ligaments that surround and stabilize the AC joint.

The estimated recovery time for an injury like ’s is to 2-4 weeks. This means that the Sooners won’t be without him for the entire season but enough time to face some other challenges.

Nonsurgical treatments, such as a sling, cold packs, and medications can often help manage the pain. Sometimes, a doctor may use more complicated supports to help lessen AC joint motion and lessen pain.

Most people return to near full function with this injury, even if there is a persistent, significant deformity. Some people have continued pain in the area of the AC joint, even with only a mild deformity. This may be due to:

It is often worthwhile to wait and see if reasonable function returns without surgical treatment.

You can pretty much bank on OU not having Bradford’s services for the home opener against and the following week against but Sooner fans need to be aware of the fact that he could miss the and Baylor games as well.

First things first, has to get the offensive line and blocking schemes shored up. The inability to pick up the blitz is ultimately what got hurt and you can bet that opposing defensive coordinators are going to bring the heat.

In the absence of you can expect opponents to do exactly what BYU did Saturday night in focusing on stopping the run and forcing Landry Jones to beat them. That means that the play-action pass now becomes ’s friend now more than ever.  I would expect a heavy dose of three tight end packages and a new commitment to a power rushing attack over the course of the next month. The Sooners have a strong stable of running backs and its time to use them. A smash mouth football revival in should start this Saturday.