Share All sharing options for: Scouting BYU: The Defense 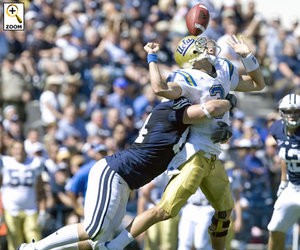 Defensive Line: The BYU defensive line situation is night and day from what they’re experiencing on the offensive line. The Cougars have three seniors returning as starters along their defensive line and are led by the Mountain West Conference’s all-time leader in sacks, Jan Jorgenson. The BYU defensive linemen average 6-3/262 and are very active. In most 3-4 defensive schemes the linemen are there simply to take up space and control the A gaps leaving quarterback pressure up to the linebackers. That clearly isn’t the case as Jorgenson’s career stats attest to.

Linebackers: Jordan Pendleton is a converted safety and will be making his first start at outside linebacker against . Other than him the other three Cougar linebackers are seniors but the only returning starter is Matt Bowman. BYU also has a lot of depth at linebacker with as many as five other guys who could see action as well.

BYU’s outside linebackers (Pendlleton and Coleby Clawson) could be closer to the line of scrimmage at times in order to get better outside containment and pressure on the quarterback. One thing about running the 3-4 defense is that you have to have really good linebackers to make it work as they are at the center of success. If they aren’t able shed blocks from fullbacks, tight ends and linemen quickly and if the three down linemen cant occupy those blockers then the whole scheme quickly falls apart.

Safeties: Scott Johnson is moving from playing cornerback last season to free safety this year and Andrew Rich is a first year starter on the strong side. BYU needs a lot of production from these two because of the inexperience and injuries to their cornerbacks.

Cornerbacks: This position has literally been a revolving door for the Cougars since their camp opened due to injuries. It appears that Brandon Bradley and Robbie Buckner will get the start but that isn’t etched in stone as junior college transfers Lee Aguirre, Brian Logan and Corby Eason could all be in there as well.

Sooner Quotes On The Cougars

How Would You Answer These Questions About The OU/BYU Game?

Cougars Want To Get Physical

Jermaine Gresham Injured Will Not Play Against BYU

Five Questions About The BYU Cougars

With A Injury To Gresham James Hanna Must Step Up