Week Four, Or The Reason Why Polls Shouldn't Be Released Until October

Share All sharing options for: Week Four, Or The Reason Why Polls Shouldn't Be Released Until October

If this college football season doesn't remind you of 2007, in which there were big upsets on a weekly basis, then you must have been living in a cave for the past few years. In Week Four, there were four AP Top-10 teams that lost, and another one nearly lost (LSU to Mississippi State). Three more ranked teams from 11 through 25 on the AP Poll also fell, meaning that nearly a third of the nation's top teams fell on Saturday.

Week Four just may need to be called the week of the upset.

It also just goes to show you why the official BCS rankings have the right idea - not being released until about halfway through the season. The preseason rankings are a joke, they rate some teams way too high, and others way too low, and if certain teams are starting closer to the finish line than others, that just seems like an unfair advantage. Plus, the giants that fell in week four got penalized harshly for their losses. California dropped 18 spots from #6 to #24 after getting throttled by Oregon. Ole Miss fell 17 spots from #4 to #21 after barely losing on the road to a tough South Carolina squad. Miami fell 8 spots from #9 to #17 after losing handily to Virginia Tech in Blacksburg. And Penn State fell 10 spots from #5 to #15 after getting upset by Iowa...again.

I think that after teams have played about 5 to 6 games (around Week 6), you should have enough information to rank the teams in a relatively fair fashion. These massive fluctuations show that the pollsters have no idea how to properly rank teams, and they don't have a clue how to penalize teams for losses, or reward teams for victories. Case in point? Undefeated Iowa is still behind Penn State, whom they beat soundly on the road, in both the Harris and USA Today/Coaches polls - the two polls that matter for BCS rankings. By the way, OU opens at #9 in the Harris Poll behind both USC and Ohio State.

More about Week Four after the jump! 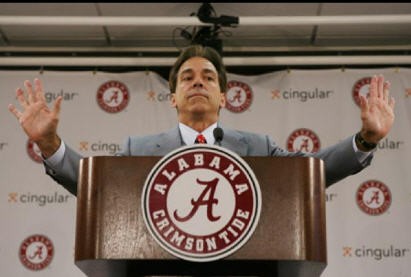 Nick Saban has the Tide rolling.

Why Are We Using These?
First, the link to the Sagarin Ratings, which are 1/6 of the computer rankings used in the BCS polls. Be advised that the BCS uses the "ELO Chess" rating on there, not the rating on the far left, or the "Predictor" rating. In this case, 1/6 of the BCS computer ratings would have Iowa at #1, followed by Boise State, Alabama, LSU and Virginia Tech. That's right, Texas and Florida wouldn't even be in the top 5. In fact, Florida would be at #7 and Texas would be at #12! Where would Oklahoma be? Scroll all the way down to #27.
Again, why are we using rankings like this as a way to determine our national champion? I understand they benefited us last year, but this is ridiculous.
The Billingsley Ratings (another sixth of the rankings) are a little better, but they still have Oregon at #5, Georgia at #10, Utah at #11, and Oklahoma at #13. The Colley Matrix (another sixth of the rankings) are atrocious. The top 5 is Iowa, LSU, Michigan, Florida and Virginia Tech. Meanwhile, Oklahoma is not even ranked, while teams like Wisconsin (#14), Auburn (#10), and Arizona (#19) are ranked.
Don't be surprised to see OU in a wildly low position when the first BCS rankings are released. To be fair, if we were to beat Texas and Miami, I'm pretty sure our computer rankings will be much better. This is also the reason why the rankings generally aren't released right away, as it takes awhile for them to work all their oddities out.
Quick Hits