Five Reasons For Concern Against The Miami Hurricanes

Share All sharing options for: Five Reasons For Concern Against The Miami Hurricanes

Oklahoma fans get to enjoy a stress free weekend of college football with the Sooners off but I can't help but think about the Miami Hurricanes. I'm anxious to see them play against Virginia Tech and while I'm expecting the Hurricane offense challenged, possibly more than they've been all season, I'm not expecting a whole lot from the Tech offense. Even though Miami is an old nemesis, dating back to the mid-80's, Oklahoma fans should cheer for a Hurricane win. The only way for the Sooners to get back into the BCS Championship race is to beat ranked teams and with Miami currently ranked higher than they've been since 2005 it puts OU playing two ranked opponents in three weeks if they can maintain or improve that ranking.

If the Sooners could beat #9 Miami on October 3rd and then #2 Texas on the 17th it would go a long way towards redeeming a season that started so horribly. Of course as good as the opportunity is to play two Top 10 teams there is a reason why Miami and Texas are ranked where they are and the Sooners certainly have their worked cut out for them. Without even taking into consideration that Baylor is sandwiched in between these two games and that makes it a huge trap game there are several other things to be concerned about Oklahoma's trip to South Beach.

Let's be very frank. OU has looked great the last two weeks but it was against Idaho State and a Tulsa team that left a lot to be desired. On the other hand Miami has a 2-0 record with wins at #18 Florida State and at home against then 14th ranked Georgia Tech. In Oklahoma's only contest against a Top 25 opponent this season they were whipped upfront. This is OU's chance to prove to the nation that they've improved in the trenches.

#4 - Miami Hasn't Been Good To The Sooners 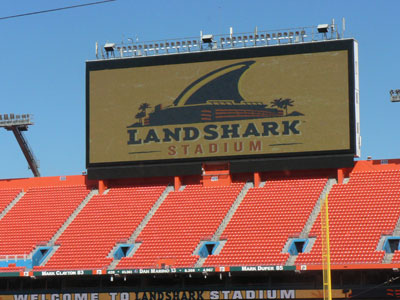 Dolphin Stadium/Landshark Stadium has not been good to the Sooners in recent years. Oklahoma has a 1-2 record here since the turn of the century.  (photo via miamihitman)

Football players are taught to play until the whistle blows and on defense you hit until the whistle blows. The Hurricanes are team tacklers in the sense that they'll lay the wood when the opportunity arises but from what I've seen they love team tackling. Miami's defense flies to the ball and if they get a ball carrier held up they'll have all 11 defenders jump on top of him if possible. As injuries have gone this season I'll be crossing my fingers with just about every tackle.

Jacory Harris is completing almost 70% of his passes (69.5%) but as good as he is he owes a lot of credit to his receivers. They are young but explosive. Receivers Travis Benjamin and Leonard Hankerson are averaging 22.4 and 21.4 yards per reception respectively and tight end Dedrick Epps is emerging as one of the best around.

We've already mentioned his completion percentage and the credit due to his receiving corps but Harris is a cool customer. Under pressure he's so calm that it almost appears that he's moving in slow motion. He's got a football savvy that's only allowed him to be sacked once, a head for the game where he almost always knows where his receivers are and the patience to make the right throw at the right time. Getting him to make mistakes won't be easy and getting him rattled will be even more difficult.