Fear The Stache But Keep Perspective

Share All sharing options for: Fear The Stache But Keep Perspective

There may not be a more famous mustache in the history of OU football than the one covering the lip of Landry Jones. Already recognized by the American Mustache Institute the Landry Jones stache, like other famous Sooner facial hairs, represents more than just a fashion statement.

The Tony Casillas stache of the mid-80's represented the power of an unstoppable force. The Captain Kangaroo like Howard Schnellenberger stache of the mid-90's represented the disappointment of mediocrity. Now in 2009 Oklahoma's newest rendition of the stache represents pride and hope. It's the pride of being Oklahoma and finding a way to overcome adversity and achieve success. It's the hope of the future where a new but proven gunslinger is waiting in the wings of what is now a program with a tradition of award winning quarterbacks 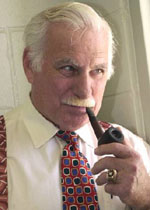 However, while we're talking about perspective let's keep in mind that Landry Jones is Sam Bradford's backup. When comparing Bradford and Jones two words should standout to quell the conversation. The words "Heisman" and "Trophy" carry a lot of weight. Oklahoma needs a healthy Sam Bradford to survive the season. This crazy notion that Sam Bradford should be put on the shelf and OU will be fine without him is just plain...crazy! Sam Bradford, if healthy, needs to be back on the field for the Sooners to attempt to lead them to do what he came back to school to do.

Forget the fear of being injured again as well. That's something that fans talk about but players don't think about. If a football player allows himself to worry about being hurt then he might as well quit playing altogether because he's lost his edge. It's easy to get caught up in a record breaking performance like the one that Landry Jones had on Saturday and forget how accurate of a passer Bradford is. Before his injury he had completed over 71% of his passes with a score and no interceptions.

With Miami, Baylor and Texas the next three games on the schedule and road trips to Lawrence, Lincoln and Lubbock looming I want a guy back there that's proven in those types of games. If healthy, Sam Bradford is Oklahoma's best chance at winning and if he's healthy he needs to be on the field a week from Saturday.